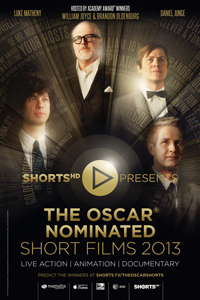 Adam & Dog (director: Minkyu Lee, USA) The story about the dog of Eden. What happened in those first days of Creation that made Man and Dog so inseparable? The dog, as he lives through this curious world, encounters a strange creature; a human being named Adam - and with that discovers a new found connection to the world.

Head Over Heels (director: Timothy Reckart, UK) After many years of marriage, Walter and Madge have grown apart: he lives on the floor and she lives on the ceiling. When Walter discovers a long-lost memento of their wedding day, he tries to reignite their old romance. But it brings their equilibrium crashing down, and the couple that can't agree which way is up must find a way to put their marriage back together.

Maggie Simpson in "The Longest Daycare" (director: David Silverman, USA) Maggie Simpson spends a day at the Ayn Rand Daycare Center where she is diagnosed at an average intelligence level. Longing to be grouped with the gifted children, Maggie finds her destiny by rescuing a lonely cocoon from Baby Gerald, who is busy smooshing butterflies.

Paperman (director: John Kahrs, USA) Paperman follows the story of a lonely young man in mid-century New York City, whose destiny takes an unexpected turn after a chance meeting with a beautiful woman on his morning commute. Convinced the girl of his dreams is gone forever, he gets a second chance when he spots her in a skyscraper window across the avenue from his office. With only his heart, imagination and a stack of papers to get her attention, his efforts are no match for what the fates have in store for him.

Plus three additional films, Abiogenesis, Dripped, and The Gruffalo’s Child