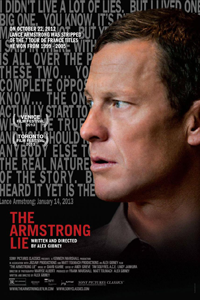 With Michael Aisner in person! Aisner was the Coors Classic race director and a cycling hall of famer who lived through much of what is captured on film in this riveting documentary about Lance Armstrong.

In some ways, Lance Armstrong is a familiar American type. A handsome man, he has strong, regular features, a ready smile, a finely honed, slender body; he also has an unblinking military gaze that would melt a steel girder. As he admits, in Alex Gibney’s documentary “The Armstrong Lie,” his life has been damaged by the need to win every encounter, be it personal or professional. Armstrong lied until it was impossible for him to lie anymore, and Gibney’s movie unexpectedly hinges on that moment. Seven-time winner of the Tour de France, world-famous exemplar of physical courage (he survived testicular cancer in his twenties), Armstrong, having beaten back countless accusations that he was doping, retired in 2005. But in 2009 he attempted a comeback. The point was to prove that he was “clean,” and to validate his earlier titles by winning another. Gibney, usually a skeptical liberal filmmaker (“Enron: The Smartest Guys in the Room” and “Taxi to the Dark Side”), was determined to make a positive movie about an American hero. During the 2009 Tour de France, he joined Armstrong’s entourage with a camera crew. Armstrong, as it turned out, didn’t win; he finished third. And in 2010 fresh accusations were made against him. Cornered, he finally confessed to Oprah Winfrey, last January, that he had been doping since the nineteen-nineties. Gibney then reshuffled his footage and put himself, as a self-confessed patsy, in the movie. “The Armstrong Lie” goes on forever, perhaps because Gibney can’t believe that, like everyone else, he’s been had. Again and again, he looks for elements of moral clarity (never mind remorse) in Armstrong, and the cyclist looks back at Gibney (and at us) as if he were a fool. His attitude is: Don’t you get it?

What we don’t get is how often winners will do whatever it takes to win. Gibney interviews Armstrong’s former teammates, who say that, in the nineties, many cyclists were doping, and that they had no choice but to do the same if they were to maintain a competitive edge. An event like the Tour de France is mostly “suffering”—a three-week slog through the Alps and other difficult terrain. Doping increases the amount of oxygen in the blood, delaying the moment when the muscles become exhausted and quit. Armstrong, like many others, took testosterone and the drug EPO. He also refreshed his own blood now and then, transporting the elixir to various tournaments and transfusing it back into his depleted system. (Gibney speculates that he withdrew blood after cycling in the Rockies.) One of the greatest athletes in the world became a kind of ghoul, feeding on his own body.

For Armstrong, success creates its own benediction, absolution, and redemption; after all, as he reminds Gibney, his victories and his personal story brought extraordinary levels of attention and money to the cycling world—competitors, cycling associations, bike manufacturers, media coverage. Many people benefitted from his victories. From our point of view, however, it’s hard to overstate his cynicism. The bitterest parts of Gibney’s movie are the interviews with the former teammates who were caught doping, and whom Armstrong, when he was still officially clean, viciously turned on. These men took the fall. In competition, they literally covered for him—providing protection from wind resistance by riding around him until he could burst from the pack at the last minute to win. For most of his professional life, Armstrong lived in a safety zone created by others. Gibney doesn’t get much out of him; his admissions are as brief, bald, and dismissive as his lies. What’s most alive in him is his contempt for “dickheads”—anyone who has ever held him responsible for anything. The most determined person in the movie, apart from Armstrong, is Betsy Andreu, whose husband, the cyclist Frankie Andreu, was an Armstrong teammate and a victim. She told the truth about Armstrong under subpoena, and refused to be rattled when she was attacked by him and his supporters. In front of Gibney’s camera, she’s both defiant and regretful. Armstrong’s fierce desire to predominate created fear and loyalty. In Betsy Andreu, he seems to have met his match.