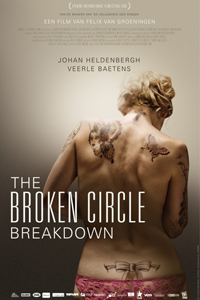 Heartache and harmonies help shape the experience of “The Broken Circle Breakdown.” It’s not an easy film to summarize, but few Belgium-born bluegrass tragedies are, arriving in a time-scrambled manner that’s fluidly realized, shaping an unusual take on the arc of a combustible relationship hit from all sides by woe. Co-writer/director Felix Van Groeningen manages this unusual vision with exceptional care, creating a kind of cinematic poetry out of disorientation, with music the glue that holds the picture together. “The Broken Circle Breakdown” is a stunning, poignant feature that deals with troubling examples of mourning and fractured communication, yet holds as a vivid statement of love in all its forms.

In 1999, bluegrass banjoist Didier (Johan Heldenbergh) meets tattoo artist Elise (Veerle Baetens), striking up immediate chemistry with their shared love of music. After a short honeymoon period, Elise discovers she’s pregnant, complicating her relationship with Didier, who communicates discomfort with the idea of fatherhood. Once baby Maybelle (Nell Cattrysse) enters the picture, the couple is transformed into a functional unit, pursing a dream of bluegrass performance together while raising the girl in an expanding home. However, tranquility is cut short once Maybelle is diagnosed with cancer, putting Didier and Elise through a test of patience and commitment as they watch their child submit to painful and exhausting chemo and stem cell treatments. As stress builds inside the relationship, the pair finds themselves at a point of no return, watching as their once passionate union is slowed and severed by time.

Time plays an important part in “The Broken Circle Breakdown.” The story unfolds in a nonlinear fashion, beginning in 2006 and working its way back to 1999, capturing all the joys and sorrow in between, with Van Groeningen pursuing an initial sense of confusion to match the whirlwind nature of Didier and Elise’s life together (markers to help orient outsiders are provided by New Year’s Eve celebrations and television footage of 9/11). Editing by Nico Leunen is extraordinarily smooth and expressive, keeping the viewer involved in the moment, even when they don’t immediately have the background information to comprehend the nuance of emotion that’s motivating the scene. Perhaps this is how Van Groeningen combats the film’s theatrical origins, sweating off the sterile nature of the stage by delivering a purely cinematic viewing experience that toys with time and the unbearable steps toward tragedy. Considering the movie’s routine elements of domestic discomfort, the disorganization fits the mood perfectly, robbing the picture of a slow, recognizable journey into despair.

However, all is not lost in “The Broken Circle Breakdown.” There’s joy to be found in music, with the picture issuing plenty of bluegrass tunes to help convey the feeling of the moment. It’s a soundtrack that’s lively and therapeutic, helping Didier and Elise bond in the early stages of their relationship, generating excitement as they share the particulars of performance. Music also acts as a distraction during Maybelle’s cancer fight, using the songs to lighten the moment, helping to forget the severity that plagues their daily life. The performance sequences are symmetrically visualized and heavenly, with the movie itself patterned on the gritty nature of the songwriting, making “The Broken Circle Breakdown” a bluegrass song itself, with its tragedies, euphoria, and soulful harmony. More than just a gimmick, the music is expertly woven into the fabric of the film, revealing a beating heart for characters often unable to express themselves.

The picture takes a few bizarre turns, including Didier’s scathing criticism of American scientific progress halted by religious paranoia, but Van Groeningen isn’t overwhelmed with bile. With two magnificently raw, pulsating lead performances to guide the way, the helmer remains on task, orchestrating an intimate study of life and death, and the strange balance of soul that emerges from the darkest of events. “The Broken Circle Breakdown” is a deeply felt, beautifully arranged film that runs the gamut of emotions, engaging on a heartrending level as its soundtrack carries the whole effort with harmonious grace.