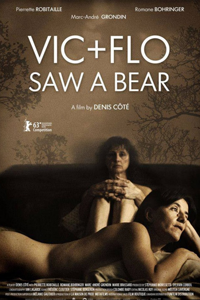 For a while now, the critical shorthand for Montreal filmmaker Denis Côté has been that he alternates between larger-scale, more mainstream — by his standards — movies like Curling and smaller, more esoteric movies like Carcasses.

But I don’t think that distinction makes much sense anymore. Last year’s Bestiaire was one of his no-budget, made-on-the-fly art flicks, yet that strange little movie shot at Parc Safari was, in my view, oddly accessible. Now comes Côté’s highest profile film, Vic + Flo ont vu un ours, and it’s a challenging piece of work.

It’s also brilliant. It won the Alfred Bauer Prize after having its world première in competition at the Berlin Film Festival, and it’s easy to understand why the Berlin jury felt this remarkable film couldn’t leave town without some kind of award. As much as any Côté film, Vic + Flo has something resembling a straight-ahead narrative, but that doesn’t stop the cheeky writer-director from abruptly shifting tone, and even genre on a couple of occasions, along the way.

The film opens with an elderly, invalid man with a flowing white beard (Georges Molnar) living in a cabin in the woods and being taken care of by a strange young man, Charlot (Pier-Luc Funk). Then his sixtysomething niece Victoria (Pierrette Robitaille) shows up and tells Charlot she’ll now take care of the old guy.

It turns out she has done some serious prison time — for what, we never find out — and she’s not there long when her parole officer Guillaume (Marc-André Grondin) arrives to start quizzing her on her post-crowbar hotel life.

The unusual gang is completed with the addition of Florence (French actress Romane Bohringer), who was Vic’s long-time girlfriend behind bars. They rekindle their romance in the outside world, but from the get-go it’s clear there are some issues here, not the least of which is that Flo is still very much interested in men, cruising a number of local guys (and bedding at least one of them).

Flo also doesn’t share her gal pal Vic’s enthusiasm for holing up in an abandoned cabane à sucre in the middle of the Quebec woods.

“It’s like death out here, Vic,” she says at one particularly desperate moment.

Vic has a simple explanation for her anti-social ways: “I’m old enough to know I hate people.”

There are some tender moments between the two of them, and even between Guillaume and them, but Côte then sends us into a tailspin and shifts into horror/revenge-thriller mode with the appearance of Marina (Marie Brassard), a nasty piece of work who’s intent on making Flo’s life a living hell.

It’s a phenomenal performance by Robitaille, who’s rarely had such a meaty big-screen role, but all the others are quite impressive, too, notably Grondin, who adds much nuance to what could have been a rather static role as the parole officer, and Bohringer, who brings a brooding intensity to her portrayal of this morose woman.

As usual with Côté, you’ll leave the cinema with more questions than answers — but I, for one, think that’s a good thing.