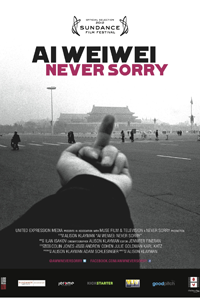 Tonight’s free screening, with director Alison Klayman in-person, is made possible by the Conference on World Affairs Athenaeum.

A compelling documentary that explodes proper and stuffy notions of what a foreign intellectual dissident looks and sounds like, Ai Weiwei: Never Sorry offers up a comprehensive snapshot of one of China's most celebrated contemporary artists, as well as one of its most outspoken critics.

A raconteur to his core, 54-year-old Ai Weiwei is a painter, filmmaker and multimedia artist who has incorporated elements of Andy Warhol's "factory" approach into his art. After having helped design his country's iconic Bird's Nest Olympic Stadium, Weiwei in 2008 became China's most famous missing person, held in police custody for three months on tax charges and other issues after publicly denouncing the Olympic Games as party propaganda. As an avid Twitterer, Weiwei drew attention abroad for this sort of commentary, as well as his advocacy on behalf of the more than 5,400 schoolchildren who died as a result of shoddy government construction in the 2008 Sichuan earthquake.

As directed by Alison Klayman, Never Sorry effectively walks a razor's edge between a work of serious sociological inquiry and a somewhat cheeky portrait of a guy whose favorite mode of expression may well be an extended middle finger. Klayman approaches Weiwei's private life somewhat gingerly, and with good reason. Though the artist asserts his mother and family life are "not representational" of who he is, it's clear the truth is a bit more complicated — as evidenced both by the fact that his father, a poet, was denounced by the Anti-Rightist Movement and in 1958 sent to a forced labor camp, but especially the fact that during the course of the movie Weiwei fathers a son by a woman other than his longtime wife, fellow artist Lu Qing, with whom he shares no children.

Weiwei, who for a dozen years studied and lived in the United States, seems understandably influenced by his time in the West, but not always in the most direct manner that one might expect. Transparency and accountability inform much of his political agitation, rather than some desire for more naked democratic upheaval. Undertaking projects to cast a light on government deceit and cover-up in the wake of the aforementioned earthquake obviously bring him much scrutiny. And when he confronts a police officer following him the evening before Weiwei is to testify in the trial of a colleague accused of "inciting subversion of state power," the officer pacifies his wounded pride by having Weiwei disturbed during the middle of the night. An assault occurs (off camera), and portions of the rest of the film detail the artist's filing of various paperwork of formal protest and investigation.

Never Sorry is much enlivened by its lively subject, but it is also an ample, interesting and ruminative showcase on China as a society in flux, simply filtered through the prism of this one man. Creativity and freedom go hand in hand, so the government's attempts to foster and promote the former while still considerably constraining the latter prove problematic. Nearly 25 years after the tinderbox of the Tiananmen Square protest and subsequent crackdown, there are still faultlines evident. When they will rupture again one cannot say, but Klayman's movie confirms and captures the currents of change.