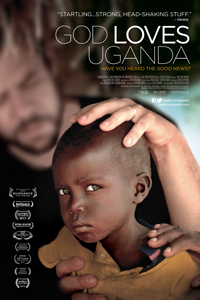 The American missionaries in God Loves Uganda are happy. That much is clear. They smile frequently as they traverse the East African country in search of souls to save, blessing small children in Jesus’ name, gently ribbing each other about street food and preaching strategies. One of the most effective things director Roger Ross Williams does with his gripping, urgent, and often horrifying documentary is to show that these young believers—most of them teenagers—are human, teach what they have been taught, and ultimately think they’re doing the right thing. It’s the message, not the medium, that’s cause for alarm.

The missionaries come from a strip-mall megachurch in Kansas City, Missouri, called the International House Of Prayer—and the IHOP acronym seems appropriate, given how corporatized the church’s faith-outsourcing practices are. IHOP has perfected the art of attracting youth to the Evangelical movement, through sermons that are basically rock concerts, and promotional videos that present the Second Coming as though it were a Michael Bay film.

But more importantly, the church instills each of its members with an intense level of individual agency. Senior pastor Lou Engle encourages his followers to become “prayer warriors” and “take over the world” with their gospel. A graphic in their own video shows the world engulfed in fire generating from Kansas City, later literalized by the young Ugandans who adopt IHOP’s fiery rhetoric in their own casual conversation. Apart from the intense messaging tactics, missionaries also build homes and schools as part of their work in the field, yet Williams declines to elaborate on this. His decision is questionable, as juxtaposing these two sides of the IHOP operation could have only accentuated the film’s already considerable impact.

God Loves Uganda concentrates on the country’s current era of violent homophobia, which the film traces back to 2009. Homosexuality has been illegal in Uganda for the entirety of the country’s history, but 2009 was the year American pastor Scott Lively delivered absurd presentations to Parliament and on national talk programs accusing gays of recruiting children to hasten the decline of civilization. One month later, the country’s infamous “Kill The Gays” bill, advocating the death penalty for any “serial offender” against heteronormativity, was introduced into Parliament. The footage of Lively’s visit and its aftermath is Williams’ trump card, a throughline from one American’s insanity to the subsequent proposal of odious human-rights abuses. The editing in this documentary, by Benjamin Gray and Richard Hankin (who also receive co-writing credit), is superb. One effective sequence after another—like a Ugandan pastor who shows gay porn to his congregation in order to incite them to support the bill—carries the alarming sensation of ideological chaos without resorting to technical trickery.

Williams, who won an Oscar for the 2010 documentary short “Music By Prudence,” paints a vivid picture of the Ugandans on the receiving end of all this faith. He makes time for the pastor of the country’s largest church, who lives in a giant mansion and dines on fine food, as well as the Kampala street preachers who rant at traffic for hours on end. But Williams really garners sympathy, rather than simply encouraging viewers to gawk at bizarre religious fervor, when he talks to the country’s gay population and LGBT rights activists, victims of an acid homophobic climate where their faces are printed in tabloids next to the words “Hang Them.” At the time of filming, Uganda’s gay community was reeling from the 2011 murder of gay-rights activist David Kato, and Williams shows devastating footage of his funeral, with friends sobbing, “Everybody is going to start killing us.”

Williams’s most damning conclusion hovers silently at the fringes of the film, there to alarm anyone who practices any form of Christianity. It is IHOP’s fundamentally un-Christian branding of the faith—the brand that peddles intolerance and doesn’t speak out on behalf of the persecuted and oppressed—whose seeds are being sowed in Uganda’s future.