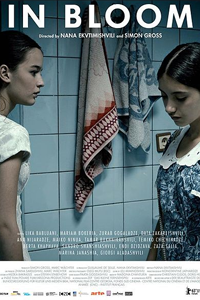 Georgia’s reputation as the latest cinematic hotspot for emerging talent is enhanced further by “In Bloom,” an absorbing, intelligently assembled coming-of-ager that revolves around two pubescent gal-pals growing up in 1992, just after independence was restored. Co-helmed by Georgian Nana Ekvtimishvili (also the scripter) and German Simon Gross, the pic feels indebted less to the likes of local luminaries Sergei Parajanov and Otar Iosseliani than to recent Romanian cinema, not least because of the involvement of ace d.p. Oleg Mutu (“Beyond the Hills”). As such, it’s a tiny bit derivative, but still has plenty of potential to travel.

Shy but beady-eyed Eka and her more precocious and confident friend Natia (Lika Babluani and Mariam Bokeria, respectively, both excellent) are best friends in that turbulent way only 13-year-old girls can be. They often bicker but find more solace in each other’s company than they do at home. Eka is largely ignored by her boy-crazy big sister, Sophiko (Maiko Ninua), and preoccupied mother, Ana (Ana Nijaradze), who’s struggling to raise her kids while her husband is in jail for reasons clarified only at the end.

At the crowded apartment where Natia lives, everyone lives in a permanent state of civil war (one that echoes the offscreen conflict with Abkhazia), waged with screaming and violence, especially between Natia’s drunk father (Temiko Chichinadze) and bitter mom (Tamar Bukhnikashvili).

Pretty Natia has already caught the eye of several local boys, including handsome Lado (Data Zakareishvili), who plans to go to Moscow for a while to earn some money, and the more thuggish Kote (Zurab Gogaladze). In an interesting variation on Chekhov’s adage that a gun introduced in the first act must go off by the third, the script has Lado give Natia a revolver for her protection while he’s away, an odd love token that becomes an object of fascination between the girls, who end up using it in different ways over the course of the narrative.

Eka seems to need protection, too, given she’s constantly taunted by local bully Kopla (Giorgi Aladashvili), who waits like a troll under a bridge every day to threaten Eka on her way home from school. But the relationship between Eka and Kopla isn’t a simple victim-tormentor dynamic, as the last act proves.

Although editor Stefan Stabenow has that annoying Euro-arthouse tendency to assert the pic’s high moral seriousness by holding nearly every shot, no matter how inconsequential, for 15 seconds too long, the narrative nevertheless smoothly weaves its numerous plotlines together to suggest the intricate fabric of these people’s intertwined lives. It works as an intimate drama about two very young woman destined by differences of class and character for very different fates, and also as a portrait of a fascinating period in the country’s social history. With the opening up to the West and the collapse of the Soviet Union, things are changing rapidly, and femmes like Eka and her sister have no tolerance for old customs that insist, for instance, that girls must be virgins when they marry.

A terrific scene involving a gaggle of teenage girls gossiping, smoking and arguing about who’s a slut gets this idea in a nutshell. Indeed, the pic has a few other tour-de-force sequences, including a family dinner at Natia’s that escalates into total meltdown, and a wedding scene that features a magnificently expressive dance by Eka shot in a single take.