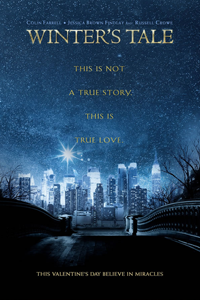 Set in a mythic New York City and spanning more than a century, “Winter’s Tale” is a story of miracles, crossed destinies, and the age-old battle between good and evil.

The film marks the directorial debut of Academy Award®-winning screenwriter Akiva Goldsman (“A Beautiful Mind”), who also wrote the screenplay, based on the acclaimed novel by Mark Helprin.