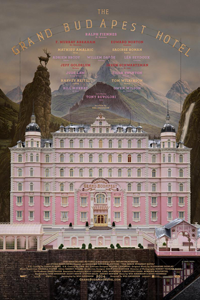 This is a FREE sneak preview put on by Fox Searchlight, who are asking people to download and print their pass by visiting their website, foxsearchlightscreenings.com/GBIFS

PLEASE NOTE: Fox Searchlight will provide more passes than there are seats. This is a common practice known as overbooking the venue which ensures them a full house. What it also means is that this pass will not guarantee you a seat but it does put you ahead of anyone in line without a pass who is also waiting to get in. Go to to the link above, print out your pass, and then show up to Muenzinger auditorium early on Monday, March 10th.

We'll be opening our doors at 6:15pm to begin seating passholders. At 6:45pm, if there are no more passholders and if there is still space, we'll seat everyone else on a first-come, first-serve basis.

Set in alternate-history 1920s Europe in a country called the Republic of Zubrowka, a famed hotel concierge by the name of Gustave H. is bequeathed a painting called Boy with Apple after his one night stand, Madame D, is killed. Madame D's son, Dmitri, vows revenge on Gustave by framing him for Madame D's murder. Zero Moustafa, the lobby boy, and his love interest, Agatha, help Gustave hide Boy with Apple from Dmitri and the authorities.