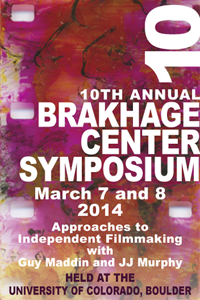 The Brakhage Center Symposium began in April, 2005, as a forum to discuss and explore contemporary experimental film. It brings guest contemporary filmmakers, scholars, critics, and curators to the Brakhage Center on an annual basis. Guest lecturers add to the resources and programs housed in the Center for students, faculty, graduates, and the community. The 2007 Symposium was the first held in the new ATLAS building. In 2009, the CU Film Studies Program expanded the one-day symposium to a special two day event, and in 2010 to a three-day program with film/video screenings, special guest lectures, and intellectual discussions.

10:00 AM
An all-day long installation by director Guy Maddin in the ATLAS Black Box Theater…

Only Dream Things (2012, installation loop, 19 min)
A-a-a-a-almost a movie about inheriting my brother’s bedroom upon his death when I was 7…
– Guy Maddin