Sights & Sounds of the Beatles: a presentation by Ken Womack 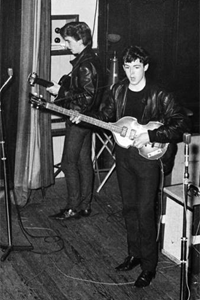 Mr. Womack is the author and editor of three books devoted to The Beatles, including Reading the Beatles: Cultural Studies, Literary Criticism, and the Fab Four (2006; with Todd F. Davis), Long and Winding Roads: The Evolving Artistry of the Beatles (2007), and The Cambridge Companion to the Beatles (2009).

Our original plan to screen A Hard Day's Night was foiled by the fact that the film is being re-released this summer and the lawyers over at Apple will not allow us to screen it before that date. As we considered a variety of options (Yellow Submarine, Good Ol' Freda, How I Won The War, The Magic Christian, The Rutles, etc.), Ken mentioned how he has a personal collection of  rare concert footage, and more, that would be of great interest to any Beatles fan.

What better way to mark the 50th anniversary of The Beatles' first U.S. visit than with a look back at how they got together in the first place? Anyone who likes The Beatles will not want to miss this chance to see what surprises Mr. Womack will have in store for us. We can now also confirm that Mr. DECONSTRUCTING THE BEATLES himself, Scott Freiman, will be joining us tonight! We have a feeling this is going to be a very fun, informative, and lively evening.

Sights & Sounds of the Beatles: a presentation by Ken Womack