The Bride of Frankenstein 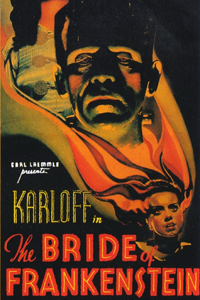 Director James Whale's erudite genius brings it all together. He sculpts every nuance of self-parody, social satire, horror, humour, wit and whimsy into a dazzling whole, keeping every one of his fantastical plates spinning until the tragic, inevitable finale.

After the enormous success of Frankenstein in 1931, Whale was, apparantly, oddly unwilling to add a second chapter to his tale of Promethean arrogance run amok. We have reason to thank whoever persuaded him to change his mind then, since Bride not only outstrips his original foray into horror in terms of invention and visual splendour, but stands as one of the most beguiling American films ever made. Packed with Whale's impish humour and sly subversion (both well documented in Bill Condon's excellent 1998 biopic Gods And Monsters), it also features characterisations of a subtlety seldom, if ever, witnessed in the horror genre and a clutch of acting performances to match.

The film is stocked with similarly arresting moments — the monster, pursued through the forest finding shelter in the house of a blind, violin-playing hermit, himself as lonely as the misbegotten creature; Pretorius encountering the monster in an abandoned crypt, offering false friendship in order to lure him back to Frankenstein's castle; the monster pleading with a reluctant Frankenstein to give life to his longed for mate. Charles D. Hall's art direction and John Mescall's glowing cinematography combine to brilliant effect, seamlessly merging surrealist fantasy with classic Hollywood gothic, garnished here and there with Expressionist flourishes. Note for instance how the forest changes from lush realism to a nightmare landscape of stunted tree trunks and tangled undergrowth as the monster takes flight from the huntsmen, his fear and panic mirrored in the unearthly, swirling vista around him.

But it is the performances of Karloff, Lanchester and Thesiger that are the real heart of the film. Karloff, here receiving above-the-title billing, discovers new heights of pathos and rage, again investing the monster with a remarkable degree of humanity. The scene in which he rails against his repulsive appearance reflected in a lake is both touching and sad. And Lanchester, who also plays the young Mary Shelley in the film's prologue, is a worthy adversary. Her darting, angular movements, reminiscent of the automaton Maria in Fritz Lang's Metropolis, are beautifully controlled and, in contrast to Karloff's hulking gait, strangely elegant. Her appearance — deathly pallid skin with streaks of white hair highlighting her mountainous bouffant — is another triumph for makeup artist Jack Pierce and an image as instantly recognisable as Karloff's monster. And the shriek of horror she emits on seeing her intended for the first time rivals Fay Wray's piercing response to King Kong as the most famous scream in cinema history. But it's Thesiger who almost walks away with the film. Manipulative, camp, with ambiguous sexuality akimbo (only the director's supremely deft touch could have got that past the Hays office) and an erudite way with a thinly veiled blasphemy, it's impossible not to see him as an expanded version of Whale himself.

Rejected by his bride and shunned by the world, the monster brings down the laboratory, burying his bride and the evil Pretorius in the debris. "We belong dead" he moans. In the original script Henry and his young wife Elizabeth also perished but at the last moment Whale saw fit to spare them. It seems an odd about face given his take on traditional relationships throughout the film. Bride has been seen, with some justification, as a thinly veiled attack on heterosexual values. Still, in 1935, if you could get away with showing a deformed monster (the ultimate rough trade?) settling down in domestic bliss, albeit short-lived, with another man, you could afford to throw the odd diversionary sop the censor's way.

The Bride of Frankenstein