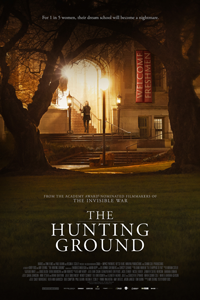 After the Oscar-nominated “The Invisible War,” a brutal expose of the problem of sexual assaults in the military, documaker Kirby Dick turns his lens on institutions of higher learning, seeing a similar institutional failure to act. The subject is already in the news thanks to a Department of Education investigation, reports of various protests (including a Columbia student who carries a mattress with her), proposed legislation and a Rolling Stone story — since disavowed — on the U. of Virginia. With a premiere where it was announced that Senators Barbara Boxer and Kirsten Gillibrand were in attendance, this galvanic and compelling doc seems likely to reverberate in the public discourse and beyond, likely matching or exceeding its predecessor’s performance when Radius releases it in March.

Scored to an ironic use of “Pomp and Circumstance,” the pic opens with homevideos of women receiving their college acceptance letters, with cries of “I got in!” While this may seem like cheap cynicism, it sets up one of the major arguments of the film, which is that universities are selling a brand and have a financial incentive to downplay incidents of campus sexual assault. Citing studies from 2000 to the present that suggest that 16% to 20% of women are sexually assaulted, the film makes the case that colleges are breeding grounds — not an association they like. Harvard Law lecturer Diane L. Rosenfeld draws an analogy: If you were to advertise that a prospective student had an equivalent chance of being the victim of a drive-by shooting, their desire to pay tuition would diminish.

The film’s central figures are Andrea Pino and Annie Clark, students-turned-activists who led a campaign to file a civil rights complaint against U. of North Carolina. The women recount their own experiences of sexual assault: Clark says her rape was compared by an administrator to a football game that she should have played differently. Harvard law student Kamilah Willingham recalls seeing the man she accused expelled and then reinstated. As in “The Invisible War,” one by one women (and occasional men) appear on camera with eerily similar stories, of how colleges downplayed the crimes’ severity or of the peer intimidation that followed after they came forward.

Former faculty members talk of the pressures to be loyal to the institution. It’s suggested that universities avoid going to the authorities because police reports create a public record of the incident. Caitlin Flanagan of the Atlantic provides an explanation for why colleges might protect fraternities, whose members form strong institutional bonds and become a source of future donations. Athletes, who according to the percentages cited constitute a disproportionate number of assaulters, seem to get special protection, perhaps because athletics are a major source of money. A partial list of universities whose presidents declined to be interviewed is buried in the end credits.

The police don’t fare much better. According to the movie, only 26% of rape reports lead to arrest, the sort of flyby statistic that cries out for more elaboration. (Most stats helpfully include citations.) Late in the film, the movie charges that an officer and prosecutor’s loyalty to their alma mater’s football team may have prevented them from aggressively pursuing a case.

The doc supplements the interviews with some startling graphics. One image juxtaposes the number of sexual-assault complaints at various universities with the lack of expulsions. A later montage, framed as a mock advertisement, lists the penalties assessed against students found guilty by their universities, with asterisks and the words “actual sanction” emblazoned below the punishments.

The film also interviews experts like clinical psychologist David Lisak and “Confronting Campus Rape” author Danielle Dirks. The absence of testimony from the accused is an understandable omission (though as the Rolling Stone article’s rollback indicates, that can be a problem). Most go unnamed, though Florida State U.’s Erica Kinsman recounts her allegations against Heisman Trophy winner Jameis Winston, which have already been written about. This sort of doc is a legal minefield, but it never seems to sacrifice urgency or cogency, although like Dick’s previous films, it may irk those who prefer a wonkier, less button-pushing approach.

Tech credits, showcasing skillful editing of an impressive amount of material, are consistent with the director’s usual polish, though the inclusion of an original song from Diane Warren and Lady Gaga — with the unfortunate title “Till It Happens to You” — seems tacky.