The Mafia Kills Only in the Summer 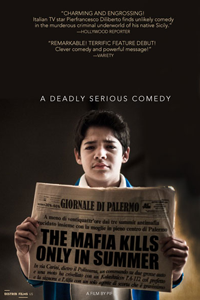 Putting an irreverent rom-com spin on the organized crime genre, this deceptively sunny rites-of-passage drama marks the big-screen debut of Pierfrancesco “Pif” Diliberto, a satirical current-affairs broadcaster whose Italian TV profile is broadly comparable to Jon Stewart's in the U.S. Taking its title from one of the many disingenuous myths that the film’s gullible young hero comes to believe, The Mafia Only Kills in Summer won the public-vote audience prize at last week’s Turin Film Festival.

Diliberto directs, co-writes and stars in a nostalgic yarn that is goofy on the surface but deadly serious beneath. Shooting in his native Palermo, the director made a point of not paying the usual kickback fees to local crime bosses. The credits express solidarity with the “Addiopizzo” movement of businesses that bravely refuse to pay Mafia protection taxes. Already assured a positive reception in Italy thanks to Diliberto’s ready-made following, the story feels sweet, universal and newsworthy enough to stir modest commercial interest in other markets.

In a series of Forrest Gump-style brushes with real history, young Arturo contrives to cross paths with a string of prominent anti-Mafia figures, including General Carlo Alberto Dalla Chiesa and the magistrates Giovanni Falcone and Paolo Borsellino. All of them went on to be murdered by the Mob. One of the film’s key technical strengths is this smart meshing of fact and fiction, with shaky cameras and vintage video cameras blurring the lines between archive news footage and staged re-creations.

Judged as pure entertainment, The Mafia Only Kills in Summer is an uneven mix. Diliberto is a capable director but an indifferent actor, mugging his way through many clownishly slapstick and cloyingly sentimental scenes. Arturo’s pursuit of Flora, as both misfit schoolboy and virginal adult, also feels implausibly clumsy and naive. But his innocence serves as a satirical metaphor for the entire population of Palermo, feigning mass ignorance of the vast criminal conspiracy that surrounds them.

Only in his twenties, following the landmark “Maxi Trial” of Sicilian crime clans, does Arturo finally wake up to Palermo’s ingrained culture of corruption and homicide. Though heavy-handed in places, The Mafia Only Kills in Summer is a generally charming and engrossing debut feature. It also wisely saves its knockout emotional punch for the finale, a stirring tribute to the judges, politicians and lawmen killed by the Mafia over the past four decades.

The Mafia Kills Only in the Summer