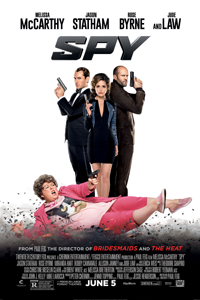 Tired of studying for finals? Take a break with Melissa McCarthy at a free advance screening of her hilarious new comedy SPY! The screening will take place on Wednesday, April 29th at 7:00PM and you can download an admit-two pass here: http://www.gofobo.com/OuGng48721. Seats are first-come, first-serve so arrive early! SPY opens everywhere June 5th! http://www.Spy-TheMovie.com