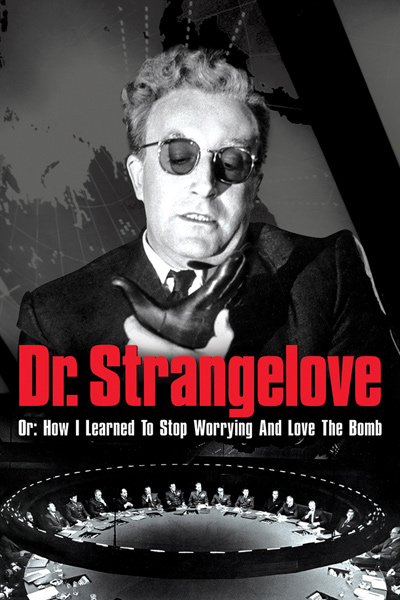 One of the best, and funniest, screenplays ever written is that of Stanley Kubrick, Terry Southern and Peter George for the 1962 Best Picture Oscar nominee, Dr Strangelove or: How I Learned to Stop Worrying and Love the Bomb. These three men adapted George’s own Cold War thriller novel, Red Alert, into what is surely one of the most perfectly constructed films ever made, perfectly blending three separate tales into one blisteringly hilarious package. Dr Strangelove is truly a classic for the ages and in 2011 stands up as one of Kubrick’s very best films.

Dr Strangelove‘s trio of story threads begins with General Jack Ripper (Sterling Hayden, 9 to 5). Having locked himself away alongside Executive Officer Lional Mandrake (Peter Sellers, The Party), the General launches a nuclear attack on the Soviet Union due to his communist paranoia about fluoridated water. From there we get the commanders of a US bomber plane as it flies towards its Soviet target; meanwhile, underground, in the Pentagon’s the war room, the President (Peter Sellers again) must try and stop the madness from continuing with the help of General Buck Turgidson (George C. Scott, Patton) and the mysterious “Dr Strangelove” (Peter Sellers, yet again).

This all may sound hopelessly chaotic, and in some ways it is, endearingly so, but it never fails to be specifically on point with its satirical targets. The performances are typically excellent of a Kubrick picture – he gets so much out of his actors – with Sellers being the standout. If I had to choose which of his three guises was my favourite, I would have to say Sellers’ President. It may be the straightest of the characters, rarely getting the opportunity to be zany and deranged, but he knocks the dialogue delivery out of the park each and every time. His telephone conversation with the Soviet Premiere is one of my favourite scenes ever put to celluloid. The timing is just delicious.

The muted black and white photography is offset by the fabulous production design, which turns the cramped confines of an airforce winger or a political war room into expansive hives of hilarious activity. Its unflinching and bold plotting is characteristic to Kubrick’s filmmaking, and yet continues to surprise. Dr Strangelove is truly one of the greatest films ever made and seeing it on the big screen with a laughing audience is something not to be missed.