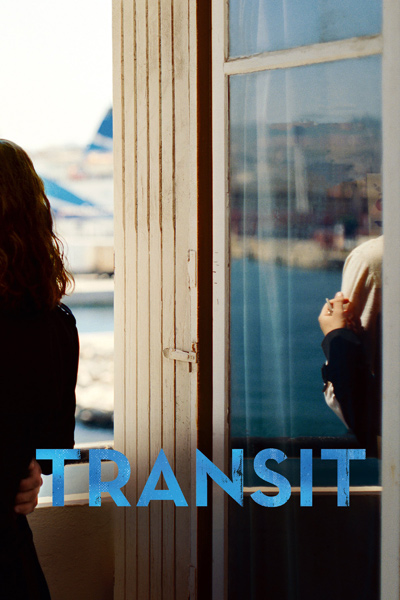 The past and present are a terrifying blur in “Transit,” a brilliant allegory set in France that opens amid wailing police sirens. The solitary man in a cafe sipping espresso doesn’t flinch. He is soon joined by a second man who gives him a name: Georg. “Why are you still here,” the second man asks, “Paris is being sealed off.” In urgent tones, they discuss visas, danger, money. Georg agrees to deliver two letters and then steps into streets filled with jackboots and terror, a world in which time seems to have folded in on itself.

An existential thriller about loss, trauma, statelessness and historical amnesia, “Transit” is the latest from the German director Christian Petzold, an electrifying, original filmmaker. Petzold is likely best known in the United States for “Barbara,” a slow-burning drama about an East German doctor who, after a failed attempt to go to the West, decides to stay. In “Barbara,” to voluntarily remain in a totalitarian dictatorship is an ethical choice, a form of resistance. There are no valorous choices in “Transit,” where leaving is a high-stakes necessity for Georg and the desperate, panicked refugees around him. To stay is to die.

To remain is also to exist in a time-space puzzle — perhaps another dimension, or a Philip K. Dick-style dystopia — in which German forces are flooding into present-day Paris. When Georg (a transfixing Franz Rogowski) leaves the cafe, the city he steps into looks familiar but different. He is meant to deliver the letters to a writer who turns out to have committed suicide, leaving behind a manual typewriter, a manuscript and a room washed in blood. “He caused me more trouble than the occupation,” a hotel worker grouses. Before long, Georg is dodging shock troops in a heart-thumping chase, and the conventional sense of historical time, with its reassuring sense of progress, has been undone.

“Transit” is based on a 1944 novel by the German-Jewish writer Anna Seghers that draws on her experience as a war refugee. Petzold’s great stroke in adapting the book is to situate it in a historically indeterminate moment, overlapping past and present like a cinematic superimposition. He does this subtly, partly by omitting Nazi iconography — the swastikas and all the rest. The sirens in the opening could be sounding in today’s France, with its street protests and official state of emergency instituted in the wake of the 2015 terrorist attacks. Even after the movie’s political stakes and backdrop come into focus, the story remains steeped in a kind of temporal dissonance.

As “Transit” unfolds, its period remains slyly, artfully indefinite. Georg is on the run — he’s soon in Marseilles — and also firmly located in his own time and space. (He doesn’t look lost in time, though you briefly may be.) Petzold doesn’t set the story in a recognizably bounded here and now (or a circumscribed there and then). The soldiers storming Paris look like contemporary French riot police, and the streets they swarm are filled with current cars and passers-by in up-to-the-minute clothes, including a woman who, as Georg scrambles from shock troops, points at him, shouting: “He’s there! There!” It’s almost a surprise when she doesn’t punctuate her cry with the word “Jew.”

In Marseilles, the plot thickens, the danger escalates, and the emotional temperature spikes. Georg assumes the identity of the dead writer, which introduces yet more complications. He also enters dramatically fraught relationships with other anxious refugees, including Marie (Paula Beer), the dead writer’s wife. A sad, jittery beauty, Marie doesn’t know that her husband is dead or that Georg has assumed his identity and, with it, their travel papers. Georg’s growing attachment to Marie is paralleled by his delicate, paternal feelings for a young boy (Lilien Batman) who, with his North African mother (Maryam Zaree), forcefully underscores the story’s topical political resonance.

By turns intimate and expansive, “Transit” is a thrilling, at times harrowing labyrinth of a movie. Petzold draws from both the traditional European art film and the mainstream commercial cinema without embracing their orthodoxies. He doesn’t over-explain the trickier plot entanglements, confident in his audience’s ability to sort through its thickets. He embraces ambiguity as a principle but also sometimes gives the movie the accelerated pulse of an action flick: There are chases, fear at the door, screams in the night. It’s easy to imagine Humphrey Bogart in the role of Georg, trading melancholic regrets with Ingrid Bergman; in some scenes, Rogowski’s looks, haunting opacity and stolid physicality bring to mind Joaquin Phoenix, creating another time slip.

Early in “Transit,” a narrator (Matthias Brandt) begins talking as Georg reads the dead writer’s novel. The narrator’s identity long remains a mystery; he drops in now and then to add or explain, not always precisely. He’s not altogether reliable, but neither is he especially unreliable. (He’s a storyteller.) As Georg begins reading, the narrator says, “He sensed it was his language, his native tongue.” The typewritten manuscript pages are excerpts from Seghers’s novel, which opens up assorted mind-bending possibilities: Georg is unwittingly following someone else’s script; he’s caught in a time loop or repeating history; or living in a present that is inseparable from the past.

Petzold’s answer, I think, can be found in the crowded consulates in which Georg waits alongside despairing men and women, caught in the stateless, agonizingly familiar limbo reproduced in today’s refugee crisis. In 1940, Seghers’s compatriot, the Jewish intellectual Walter Benjamin, spent time in Marseilles trying to secure his own travel papers. Benjamin haunts Petzold’s movie, including in a shot of a sign for Rue des Pyrénées. Benjamin ended up fleeing across the Pyrenees Mountains, killing himself in Spain.

In one of Benjamin’s final works, he wrote that “the ‘state of emergency’ in which we live is not the exception but the rule,” sounding an alarm about fascism that resonates powerfully in Petzold’s extraordinary, haunted movie.