In the Mouth of Madness 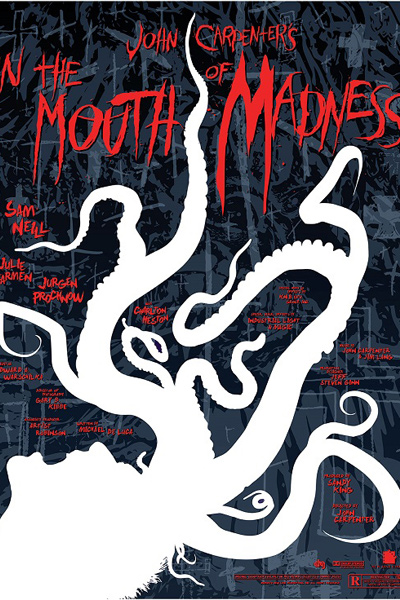 Film 3003: The Cinema of John Carpenter with introductions by Professor Sabrina Negri of C.U.'s Cinema Studies.

John Trent is an insurance fraud investigator. After the disappearance of a famed horror author Trent is assigned the case to discover the truth behind what happened. Along with the help of the author’s editor, Linda Styles, Trent descends into a dark world. The more he learns about the author and his work, the more the lines between fantasy and reality begin to blur. It seems like there is more to this story than meets the eye...

This is a very different kind of film for Carpenter. It is the kind of film where you have to pay close attention or else you might miss some vital little details. It is also different from other films that Carpenter directed in that it deals with Lovecraftian themes and it makes you question what is real.

The basic premise of the plot focuses on John Trent. When horror author Sutter Cane goes missing Trent is hired to see if Cane’s publishers faked his disappearance in order to get the insurance money. Through this investigation, we as the audience are taken on a journey that does not have a linear timeline. This adds to the feeling that reality is bending as the story continues. We also learn that Cane’s books not only seem to have a psychological effect on the readers, but that they may be part of a plan to unleash monstrous creatures from another world. This plot really drew me in because it was unexpected, and it made you pay attention. If you didn’t pay attention you were likely to miss some of the best parts.

This was a brilliant performance by Sam Neill (Jurassic Park, Event Horizon) as John Trent. Neill has been in many major motion pictures, and he never disappoints. His portrayal of Trent stood out as another great performance because of the transformation his character goes through. Again, this isn’t something you see in a linear timeline. The audience is introduced to Trent towards the end of his transformation; then they get to see what lead to his downward spiral into madness. His journey as the ever practical and skeptical investigator that eventually becomes a man whose world has been turned upside down is breathtaking.

Carpenter is known for having gorgeous practical effects in his films. This one is no different. For the most part we see simple makeup effects on the people who have been infected by Cane’s writing. There were only a few of the practical effects that truly stand out. One amazing effect was of the editor, Linda Styles, as her body contorts and twists into a grotesque thing. Another practical effect from the film was brilliant because of it’s subtlety. The sweet little old inn keeper, Mrs. Pickman, becomes a horrific tentacle covered monster. What is clever about the practical effect is that you never see the monster full on. There are small close ups of a tentacle here and there, but for the most part it is a simple silhouette. The final stand out scene is when the evil beings from the other side break into our world. There are many giant, slimy, tentacle covered beasts ready to wreak havoc in our world. The effects, much like Trent’s grip on reality, become more and more fantastical as the story progresses.

In the Mouth of Madness