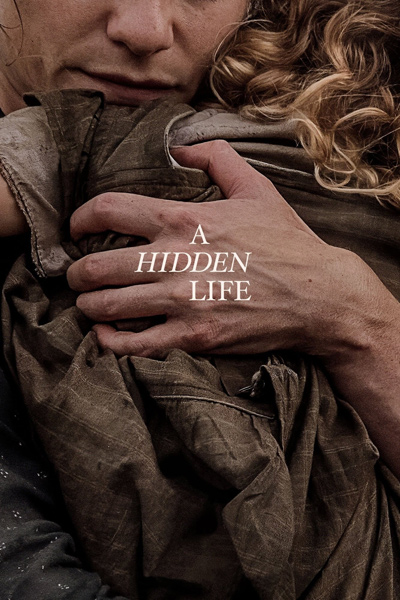 ...for the growing good of the world is partly dependent on unhistoric acts; and that things are not so ill with you and me as they might have been, is half owing to the number who lived faithfully a hidden life, and rest in unvisited tombs.

I've read that over and over since watching the film to realize the more I do, the more it feels cool, soothing against my tongue as a tonic does, or an oath devoutly felt. It's a roadmap to a life lived faithfully to an ideal rather than enslaved to other considerations, venal or material--and the way I think most sensitive, intelligent, moral beings wish to live, had they only the means to do it. Especially if they don't. Freedom shouldn't be something we afford, but rather something we can't afford to be without. A Hidden Life is an ecstatic telling, like Malick's The New World, of the life of a real person. In this case, of Austrian saint Franz Jägerstätter (August Diehl), beatified in 2007; his martyrdom is told here in a manner half like The Passion of Joan of Arc and half an imagistic adaptation of William Cullen Bryant's "Thanatopsis." It's heartbreaking in its beauty, immense in its sadness, and so topical as to be all but unbearable. The tragedy of us is that this story will always be topical.

Adapted from a collection of Jägerstätter's letters edited by his biographer Erna Putz, Malick's film finds Franz in the inherited, rural farmstead of his foster father on the outskirts of tiny Sankt Radegund in Upper Austria. We flash to the day he first sees his wife, Franziska Schwaninger (Valerie Pachner)--in one of Malick's trademark voiceovers, Franziska remembers she was in her best dress, and how when Franz rode in on his motorcycle and looked at her, he knew. They marry, work with the land, and have three daughters before WWII comes and takes Franz away. He trains with a small regiment but refuses to pledge allegiance to Hitler. Upon returning home on a deferment for farmers, he begins to earn the ire of his neighbours, who see him as a peacenik and worse: to some, Franz is a traitor. When there's a second draft and he refuses again to pledge fealty to a man and a war he doesn't believe in, he's imprisoned, tried for dissension, tortured, and ultimately found guilty and sentenced to death. We see it coming. Knowing Franz became a saint tells us all. But until it happens, there's hope somehow that he'll sign away his values so he'll get to see his daughters again. The question repeatedly asked by his inquisitors is why persist in this protest when no one will know of it, when the course of the conflict--and the heart of the man he's protesting--will not be affected by it. The late Bruno Ganz plays Leuben, one of Franz's final judges. He invites him into his office, treats him like a human being for a moment, and tries to help him see the folly of holding true to his principles. No one will know. Nothing will change. Pledge devotion to an immoral cause--it can't change what he feels in his heart, after all. Do it, and he'll go free. Franz smiles and says that he is already free. Diehl plays Jägerstätter with a quiet sweetness, a calm resolve. What's devastating about A Hidden Life are all the little moments Malick captures of Franz, shackled, pausing to help another prisoner get up off the ground; or sneaking an extra bite of bread for someone who's hungrier than he is; or, in the process of being moved, pausing not to contemplate escape, but to pick up an umbrella he's accidentally knocked over. He is, always, trying to do the kindest thing, ever conscious that daily life is a series of decisions and so long as he's allowed them, he will choose to do the best possible thing. The idea that God's gift to Man is choice becomes a question not of predestination but of choosing whether every impact you make is a positive one. Leuben pats Franz on the shoulder. He's old and near death. He understands. He still sentences him to die.

The simplicity of Franz's resistance reminds a great deal of Joan of Arc's testimony; the extent of his betrayal by his own country reflects it as well. A Hidden Life should be programmed with Martin Scorsese's Silence, another film about the power of true faith when it's paired with true humility. Franz is asked if he believes he's better than anyone and he says he's not only not better, he also doesn't know whether he's doing the right thing. "I don't know everything," he says. What he does know is that the only way to be free is to be kind to others while expecting nothing in return. By the third or fourth time he's told his sacrifice will not make a difference, I came to realize that his sacrifice makes all the difference. A Hidden Life is the kind of art that is a call to arms, that can change the course of a life by offering a plan for healing the soul as the only means by which we have a chance to heal the world. I've never fallen out of love with Malick, as seems the fashion. His non-narrative excursions have to me unfailingly presented spiritual narratives. He's a singular artist who's easy to lampoon but impossible to recreate, although many have tried. There's an element of the ineffable to his pictures that speaks to the heart of poets and Romanticists. A Hidden Life is sublime. It's a supreme act of hope appearing in the middle of a period of collective hopelessness. Gorgeous, too.