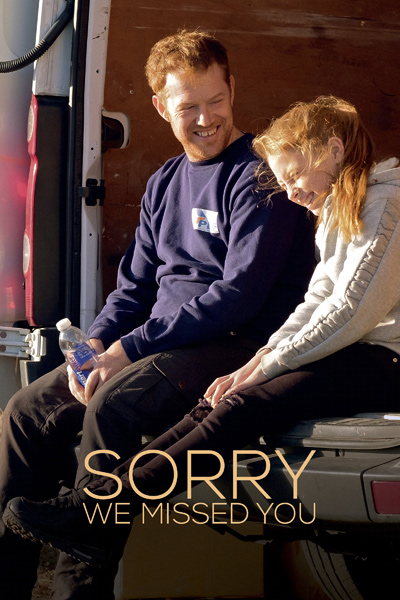 Check out our podcast episode from April 17, 2020 about this movie

In Ken Loach’s new film a man makes a pact with the devil and a corporation turns humans into robots. Not literally. Loach, 83, treasured for his neo-realist aesthetic, hasn’t changed the habits of a lifetime.

Ricky, already in debt, thinks that working as a self-employed parcel-delivery-man will turn his fortunes around. He buys into the idea that by working “with” a firm called PDF (Parcel Delivery Fast) he’ll become the owner of a “franchise”. Driving his own white van and armed with a gadget that tracks everything he does, Ricky hits the streets. He’ll deliver those parcels, whatever the cost.

Here’s where things get weird. Ricky’s family make it impossible for him to do his job. Seb starts acting like a boy possessed. And there’s a strange gleam in Liza-Jane’s eyes...

Ricky is willing to sell his soul and his freedom in order to achieve success. His loved ones want the real Ricky back. What makes the film terrifying is that everyone’s behaviour makes sense. Ricky doesn’t mean to hurt his family and they don’t mean to hurt him.

It’s a wickedly clever touch that Abby’s job repeatedly brings her into contact with incontinent people, including a woman covered in her own excrement who scratches Abby to pieces. That detail interlocks with the sight of Ricky urinating into a bottle (there’s no time for him to nip to the loo). So many people in this movie have lost control and their helplessness redefines the term body horror.

Sure, Paul Laverty’s script has its unsubtle moments. But mostly it’s funny and restrained. A highlight is Ricky’s debonairly brusque boss, vividly played by Ross Brewster.

Meanwhile, Honeywood is howl-out-loud moving. And Stone and Proctor are as supple as dolphins.

Loach, clearly still buzzing from the success of I, Daniel Blake, is having the time of his life. Don’t miss this. You’ll be sorry if you do.