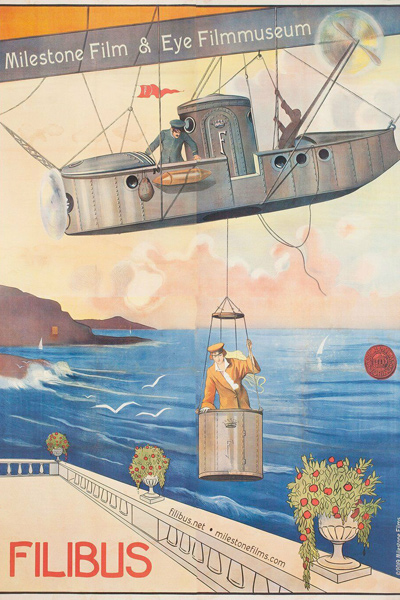 Who was the Joker of 1915? Could it be the supervillain of the Italian silent feature “Filibus,” a prankish, technology-savvy jewel thief who repeatedly confounds a famous detective and, also a master of disguise, is in fact a woman?

“Filibus: The Mysterious Air Pirate” opens Thursday, Oct. 24 for a week at Anthology Film Archives in Milestone’s new 2K digital restoration. More than a century old, it may be the spryest comic-book movie of the season and perhaps the most progressive.

Produced by a small studio in Turin and shot largely on the Italian Riviera, “Filibus” is a lighthearted analogue to “Fantômas” and “Les Vampires,” the pulpy serial melodramas produced in France by Louis Feuillade. The advertising campaign was similar, with enigmatic posters asking, “Who is Filibus???” Who indeed?

The stodgy detective Kutt-Hendy sets out to capture the elusive criminal who, in the very first scene, is revealed as Baroness Troixmond — a name suggestive of her multiple identities.

Amused by Kutt-Hendy’s boast that he will collect the reward offered for capturing Filibus, the baroness informs the police that the detective himself is Filibus and proceeds to frame him for her crimes. Gadgets abound but her main secret weapon is the dirigible that, perpetually hovering in the clouds, can be used for surveillance and the application of knockout drugs, as well as facilitating various abductions, thefts and escapes.

The airship gondola further serves as the baroness’s dressing room. Repeatedly hoisted up in a bucket-like contraption by her impassive crew, she smoothly changes get-up and gender. Working clothes include a mask and newsboy cap outfit for burglary and a svelte tuxedo for passing herself off as the dapper Count de la Brive, a guise in which she courts Kutt-Hendy’s unwitting sister.

Deceptions ensue — many revolving around a precious Egyptian antiquity — and, while the count (or rather the baroness) may not ultimately get the girl, a letter drops from the sky as the movie ends to suggest that Filibus’s contest with Kutt-Hendy will continue. Unfortunately it did not. Like much of Italy’s lively film industry, the studio that produced “Filibus” appears to have been a casualty of World War I.

“Filibus” was directed by Mario Roncoroni, later involved in a film version of the poet and proto-fascist Gabriele d’Annunzio’s patriotic tragedy “La Nave,” and written by Giovanni Bertinetti, known for his science-fiction novels, several of which concern fantastic flying machines. Given his interests, Bertinetti is thought to have been influenced by Italy’s Futurist avant-garde, an affinity further suggested by a bombastic manifesto, “The Cinema: School of the Will and of Energy,” that he published in 1918, calling the medium “the exponent of an entirely new way of considering life and the universe.”

Anticipating the kind of anxieties that were recently raised by “Joker,” Bertinetti argued that seemingly “frivolous” movies were a form of “light hypnosis” useful in stimulating passive spectators to action — and thus raising the possibility that “Filibus” was intended to inspire a nation of independent women if not cross-dressing burglars.