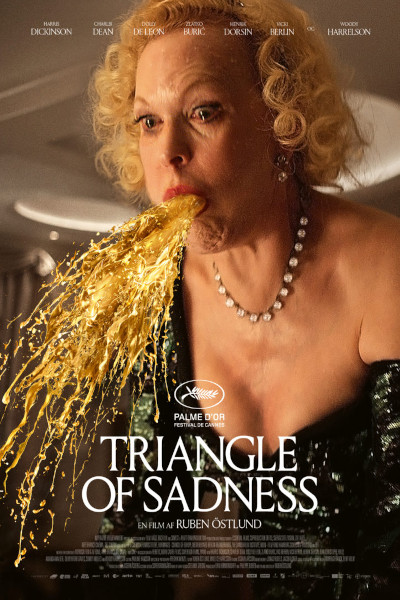 Ruben Östlund's "Triangle of Sadness" has become one of the more divisive Palme d'Or winners in years. On one side, there are those who think its underlined themes and obvious targets are a bit unrefined and obvious. On the other, there are people who would argue those targets deserve a skewering and the writer/director of "Force Majeure" and "The Square" uses his wit to do so with hysterical precision.

It's all kind of obvious but it does put down some rich soil for a potential dismantling of societal expectations. These people have clearly been set up to fall from the pedestals on which they live. That comes in the centerpiece of "Triangle of Sadness," a ridiculous yet riveting sequence in which the passengers sit for a lavish Captain's Dinner on a stormy night. As Woody Harrelson's world-weary captain eats a hamburger instead of whatever concoction the chefs have dreamed up to impress the passengers, Östlund tilts his camera back and forth with the waves, making us feel nearly as nauseous as the characters on-screen. The night devolves into a chaotic expression of bodily fluids that basically tear down all societal structures and sets up the final act, one that reverses roles and puts one of the ship workers (a memorable Dolly De Leon) in a position of unexpected power.

It's hard to shake the feeling that Östlund thinks he's saying more here than he actually is—I think that pretentious intent is at the root of most on the hate side of this film's divide—but that didn't make the film significantly less entertaining as a social satire for me. Östlund is shooting fish in a barrel, but the fish had it coming, and he cooks them up into a tasty meal, complete with sea urchin and squid emulsion on the side.