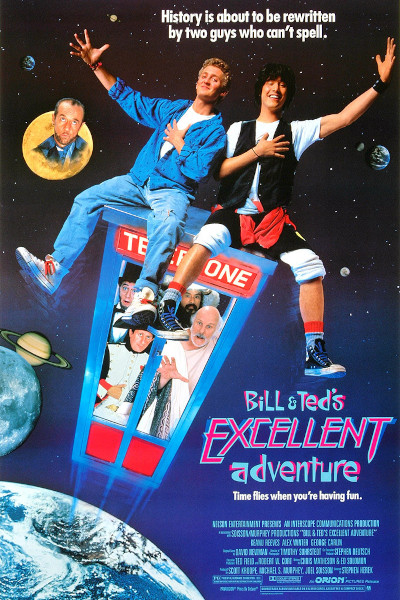 "Bill & Ted's Excellent Adventure" is a dilapidated comedy about two of history's preeminent nonentities. To say that Bill and Ted (Alex Winter and Keanu Reeves) are underachievers is unfair to all those who actually possess untapped potential.

Together, these San Dimas, Calif., teens probably couldn't muster the brainpower to operate soap. Their dream of dreams is to be global rock stars, and every afternoon they plug their guitars into their amps and imagine themselves as the Wyld Stallyns -- their band's name -- living the wild life. Never mind that they can't play, they're flunking history, and the threat of military school or worse looms large in the very near future.

If they are to avoid these disastrous events, they must give a history presentation to end all history presentations. And since it's scheduled for the next day, only a miracle can save them. When the needed miracle arrives it takes the unlikely form of George Carlin, who materializes in a phone booth from the future to make sure the boys remain together, continue their music and, in so doing, preserve the fate of all mankind. They manage this by using the phone booth, which doubles as a time machine, to visit various dates in history in order to retrieve the likes of Napoleon, Socrates -- whom they call "So Crates" -- Lincoln, Beethoven, Freud and others for their class.

"Bill & Ted" is the shaggiest of shaggy dog stories. The movie is mounted entirely on the notion of having these two wholly oblivious geeks mix with the great minds of the world -- not in and of itself a bankrupt premise for a teen comedy. But Chris Matheson and Ed Solomon, who wrote the script, have made only the sketchiest attempts to draw their historical characters. They exist as foils and nothing else, and the gags that are hung on them are far from first-rate.

The stars themselves are frisky and companionable, like unkempt ponies. If ignorance is bliss, these are the most blissed-out kids ever. But because the characters they're playing and the lingo they spout are already out of date, the timing of the picture seems out of whack. It's peddling last year's hip.