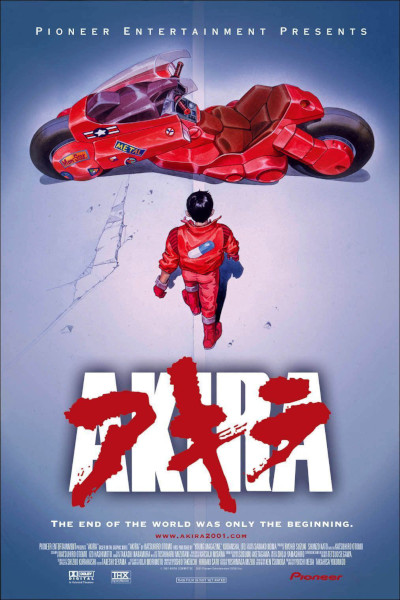 A deeply strange message from the future is what this movie is here to (re)deliver: both post- and pre-apocalyptic, a nuclear-age parable of anxiety to compare with Godzilla. Akira, released in 1988, is the cult Japanese cyberpunk animation from director Katsuhiro Ôtomo, who also created the original manga serial. (It is set in the impossibly futuristic year of 2019, so maybe last year would actually have been the time to rerelease it.)

Thirty years on from a devastating explosion that razed the city, a new capital – Neo-Tokyo – has been born: sprawling, chaotic, like the LA of Blade Runner. The city is beset with violence from warring motorbike gangs, and by protesters rioting against unfair taxes. A hatchet-faced army officer says that Neo-Tokyo is "a garbage heap made of hedonistic fools".

Biker teen Kaneda (voiced by Mitsuo Iwata) is in the middle of a confrontation with a rival mob, when his friend Tetsuo (Nozomu Sasaki) accidentally crashes into a bizarrely wizened child-goblin figure who has apparently escaped from a top-secret government research facility investigating this race of troll-infants with bizarre powers.

Tetsuo finds that he himself now has staggering telekinetic abilities, and becomes public enemy number one for these sinister G-men. He assumes superhuman qualities, evolving into a new entity, a virtual messianic figure for this occult race of uniquely gifted or cursed lab rats. It is Tetsuo's destiny to discover the truth about Akira, a much-rumoured godhead or wellspring of essential cosmic power that is to be found somewhere underneath the city: it may have been responsible for the explosion 30 years ago.

And so the final 30 minutes of the film build to a nightmare of utter destruction – longed-for destruction, in fact, an annihilation that will wipe out this culpable, wretched world. Akira's strangeness is very startling and sometimes bewildering. But there is a thanatonic rapture to its vision of a whole world ending and being reborn as something else.