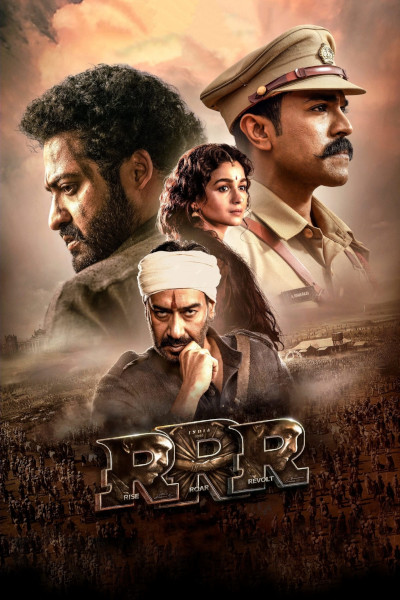 "Delirious" is the word to describe S.S. Rajamouli's Indian action-adventure film that has become a worldwide phenomenon since its summer release.

This Telugu-language big-budget spectacle starring Tollywood superstars N.T. Rama Rao Jr. and Ram Charan as revolutionaries fighting against the British Raj in 1920 features the sort of dizzyingly over-the-top action sequences and exuberant musical numbers that send audiences into a frenzy. Wildly entertaining for every minute of its three hour-plus running time, RRR has become one of India's highest-grossing films of all time and is now generating Oscar buzz.

Although the central characters are based on real-life historical figures, RRR (the title stands for "Rise, Roar, Revolt") is strictly fictional, as one of the most extensive opening disclaimers ever seen onscreen takes pain to emphasize. (We're also assured that all of the animals seen in the film, and there are plenty, are strictly CGI. Which is definitely a good thing for them.)

We're introduced to the lead characters in two bravura action sequences before the opening credits, which don't appear until some 40 minutes into the film. Ramo Rao Jr. plays Bheem, a burly member of the Gond tribe who attempts to trap a wolf only to come into hand-to-paw combat with a rampaging tiger, whom he manages to subdue through a combination of cunning and superhuman strength. Charan plays Raju, a seemingly superhuman Indian member of the British police who, when first seen, dives into a raging mob of what seems like thousands of rioting Indians to subdue a criminal and somehow manages to fight all of them off successfully.

And, of course, there are musical numbers, including the instant classic "Naatu Naatu," in which Raju and Bheem engage in a frenetically athletic dance-off with rhythm-challenged Brits that would have made MGM's Arthur Freed proud. (I watched the film on Netflix, and can only imagine the hysteria the scene must have induced in theaters.)

Director Rajamouli, who in just seven years is already responsible for three of India's highest-grossing films of all time, displays his obvious love of popular cinema in every wildly colorful, overstuffed frame. No matter that the CGI or aerial wire work is sometimes all too obvious, or that the frequent use of slow-motion borders on parody. It's all presented in such visually dazzling fashion that your eyes are fully satisfied before your brain can make any objections.

And the two endlessly charismatic lead actors display such dynamic physicality in their hyper-muscular performances that they fairly burst from the screen. Their characters provide the most evocative screen bromance since Butch and Sundance.