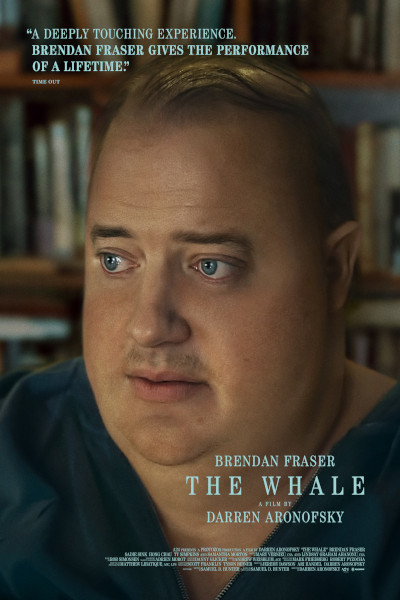 From Darren Aronofsky comes The Whale, the story of a reclusive English teacher who attempts to reconnect with his estranged teenage daughter. Starring Brendan Fraser and based on the acclaimed play by Samuel D. Hunter.

Even if you don't follow the Oscar-predictions beat like the showbiz soap opera that it is, you've probably heard about how incredible Brendan Fraser is in the role of Charlie. The hype around the performance is earned. It's not an exaggeration to say it's some of the best, if not the best work of his career, and the kind of screen turn that taps into your long relationship with an actor while revealing aspects of their talent you never knew they had. You may also know that he's been through some rough times, and the emotional reaction to his return to premiere screenings, red carpets, etc., on this level has been sincere. Fraser tends to blow off talk of a comeback, but that's what The Whale is gifting him with. And there are so many moments where you watch the actor in this part and you want to get behind this lumbering, melodramatic, misbegotten mishegas of a character study just for him.

…[T]here is a major sensibility problem going on here, in which the way the actor and the film itself view Charlie sometimes seem to be at complete odds with each other. You could never accuse Darren Aronofsky of being an unimaginative or risk-averse filmmaker; he's one of those auteurs whose failures are often more interesting than many other directors' successes. This is an artist who isn't afraid to swing for the fences and suffer the occasional strike-out — say what you will about Mother!, it took guts (and some lower, swinging appendages) to make something that conceptually daring. But even as early as Requiem for a Dream (2000), there was the sense that any present sensitivity could be drowned out by a style that prioritized sturm und drang. The need to dazzle, or pummel you into submission, sometimes steamrolled over the proceedings. He'd rely on a strong performance to carry viewers through all that feel-bad flash.