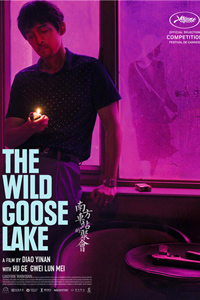 Support the IFS by screening titles straight from independent distributors who routinely provide us with interesting movies. By clicking "watch now" below you'll be able to watch a theatrical release and the distributor will then split the proceeds 50/50 with the IFS, which in turn helps buy us time while we wait for the green light to return to Muenzinger Auditorium.
From acclaimed director Diao Yinan, THE WILD GOOSE LAKE is the eagerly anticipated follow-up to his 2014 Berlinale winning neo-noir BLACK COAL, THIN ICE. Toppling box office records in Diao’s native China, THE WILD GOOSE LAKE “cements his status as a master filmmaker with another ingenious crime epic” (Little White Lies). When small-time mob leader Zhou Zenong (Chinese superstar Hu Ge) accidentally kills a cop, a dead-or-alive bounty is placed on his head, forcing him on the lam from both the police as well as dangerous gangsters out for the reward. Hiding out in China’s densely populated (and deeply divided) Wuhan province, Zhou becomes entangled with a beautiful, enigmatic woman, who has mysterious intentions of her own. Featuring gorgeous, neon-drenched cinematography and bursts of shocking, expertly choreographed action, THE WILD GOOSE LAKE is “spellbinding” (Rolling Stone), “brilliant" (Indiewire) and “downright Hitchcockian” (AV Club).