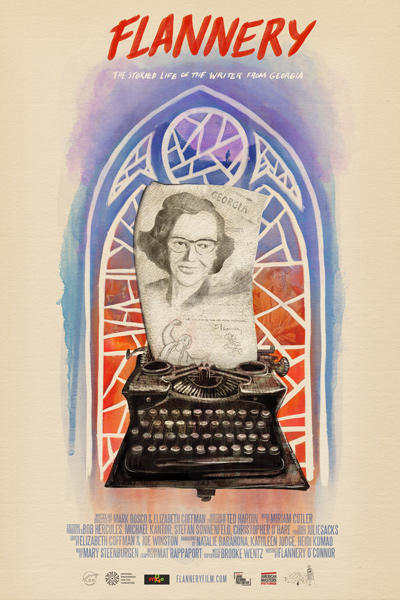 Check out our podcast episode from September 28, 2020 about this movie

Winner of the first-ever Library of Congress Lavine/Ken Burns Prize for Film, Flannery is the lyrical, intimate exploration of the life and work of author Flannery O’Connor, whose distinctive Southern Gothic style influenced a generation of artists and activists. With her family home at Andalusia (the Georgia farm where she grew up and later wrote her best known work) as a backdrop, a picture of the woman behind her sharply aware, starkly redemptive style comes into focus.

A devout Catholic who collected peacocks and walked with crutches (due to a diagnosis of lupus that would take her life before the age of 40), O’Connor’s provocative, award-winning fiction about southern prophets, girls with wooden legs and intersex “freaks” was unlike anything published before (or since). Over the course of her short-lived but prolific writing career (two novels, 32 short stories and numerous columns and commentaries), O’Connor never shied away from examining timely themes of racism, religion, socio-economic disparity and more with her characteristic wit and irony.

Including conversations with those who knew her and those inspired by her (Mary Karr, Tommy Lee Jones, Hilton Als and more), Flannery employs never-before-seen archival footage, newly discovered personal letters and her own published words (read by Mary Steenburgen) alongside original animations and music to examine the life and legacy of an American literary icon.