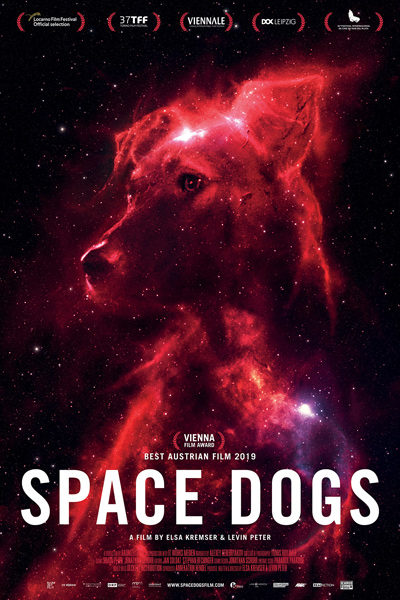 Check out our podcast episode from October 5, 2020 about this movie

Laika, a stray dog picked up by the Soviet space program on the streets of Moscow, became the first living being to orbit the earth when she was launched into space on Sputnik 2. Although Laika would not survive the journey, directors Elsa Kremser and Levin Peter trace the persistence of her memory and legacy into the present day. As the capsule containing Laika re-entered Earth’s orbit and began to burn up, the narrator announces “What had been a Moscow street dog had become a ghost.”

The ghost Laika lives on in the present-day strays of SPACE DOGS. Photographed at ground level with wandering, hypnotic camera movements, the strays are seen navigating the urban environs of modern Moscow. In hewing closely to the dog’s point of view, the city is rendered as a strange, alien environment. Pulsating music from buildings and unidentified passerby take on an unfamiliar quality as the dogs explore this strange new world.

Archival footage of the Soviet space program is interwoven throughout the film, reveling in the bizarre tests and procedures the canines were subjected to in preparation for space travel. The hum of space-age machinery blends seamlessly with the hypnotic drone of the soundtrack, which in turn echoes the alien sounds of the modern city. With stunning cinematography and meditative pacing that recalls the work of Andrei Tarkovsky, SPACE DOGS is a singular work that de-centers humans in order to uncover a forgotten history.