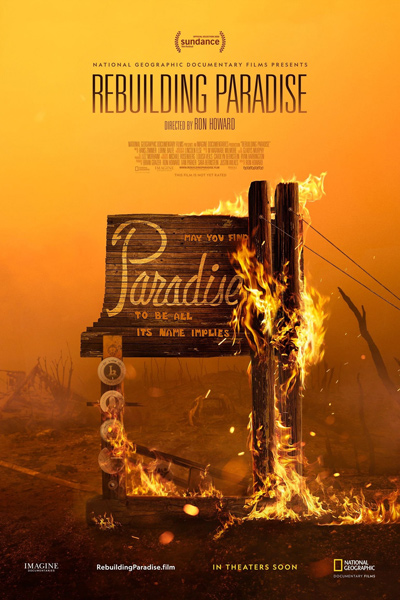 Check out our podcast episode from August 28, 2020 about this movie

On the morning of Nov. 8, 2018, a spark from a transmission line in Northern California, coupled with climate-impacted conditions aka global warming’s aftershocks, quickly grew into a devastating firestorm that engulfed the picturesque city of Paradise, California. By the time what became known as the Camp Fire was extinguished, it had killed 85 people, displaced 50,000 residents and destroyed 95% of local structures. It was the deadliest U.S. fire in 100 years — and the worst ever in California’s history. From the moment the crisis began, Oscar-winning director RON HOWARD led a filmmaking team to the city and would go on to spend a year with Paradise residents, documenting their efforts to recover what was lost.

As residents faced the damage to their lives, to their homes and to more than 150,000 acres in and around their 141-year-old town, they did something amazing: They worked together to heal. The community members went on to forge a bond stronger than what they had before the catastrophe, even as their hope and spirit were challenged by continued adversity: relocations, financial crises, government hurdles, water poisoning, grief and PTSD.