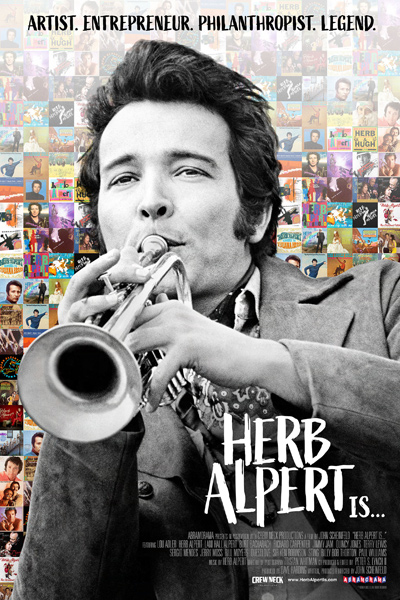 Check out our podcast episode from October 9, 2020 about this movie

Herb Alpert was a shy third grader when his music appreciation teacher arranged instruments on a table and encouraged her students to experiment. The 8-year-old picked up a trumpet and effectively found his voice. In 1966, Herb Alpert and the Tijuana Brass outsold the Beatles two to one. Between 1966 and 2014, the musician who wed Dixieland and mariachi styles with jazz and pop, won nine Grammys, a testament to his virtuosity and enduring appeal.

In 1962 he co-founded the indie label, A & M Records with business partner, Jerry Moss, which introduced artists as varied as Carole King, Cat Stevens, The Carpenters, Janet Jackson, Peter Frampton, Joe Cocker, Quincy Jones, Sergio Mendes and The Police. A&M would go on to become one of the most successful independent labels in history. His work as an abstract painter and sculptor has been shown worldwide. Through the Herb Alpert Foundation, he has given significant philanthropic support of educational programs in the arts nationwide, from the Harlem School of the Arts and Los Angeles City College to CalArts and UCLA. With his #1 record, “Rise” (1979) and romantic ballad “This Guy’s in Love With You” (1968), Alpert is the only solo artist to have number-one singles on both the instrumental and vocal charts. With the Tijuana Brass, Alpert had nine consecutive Gold albums. After it disbanded, he earned six more. In all, he has a total of 15 gold and 14 platinum records.

John Scheinfeld’s Herb Alpert isR30; paints a portrait of the sensitive artist and self-described “card-carrying introvert” as someone who prefers to let his music, painting and sculpture speak for him. Thus, Scheinfeld relies on the likes of Burt Bacharach, Richard Carpenter, Bill Moyers, Questlove, and Sting to talk about Alpert’s achievements as a musician and record producer. Others, like Richard Lariviere, president of Chicago’s Field Museum, praises the musician’s expressionistic sculptures that permanently stand in the museum’s gardens, and Eric Pryor, head of The Harlem School of the Arts, testifies to the impact of Alpert’s philanthropy.

Among the other people interviewed are Jerry Moss, Alpert’s long-time partner in A & M Records, (Alpert is the “A,” and Moss the “M”); Lou Adler, legendary producer of Carole King and The Mamas and the Papas, who collaborated with Alpert on songwriting early in their careers, and worked together with the legendary Sam Cookeand 2 time Grammy Award winning singer, Lani Hall, who first met Alpert when he produced Sergio Mendes and Brasil ’66, for which she was the lead vocalist. She wed Alpert in December 1973 and aside from her own, solo, singing career, she has been a vocalist on many of his subsequent albums. He calls her his muse. For the 72 million albums he has sold, Alpert ranks #7 on Billboard’s Top 200.