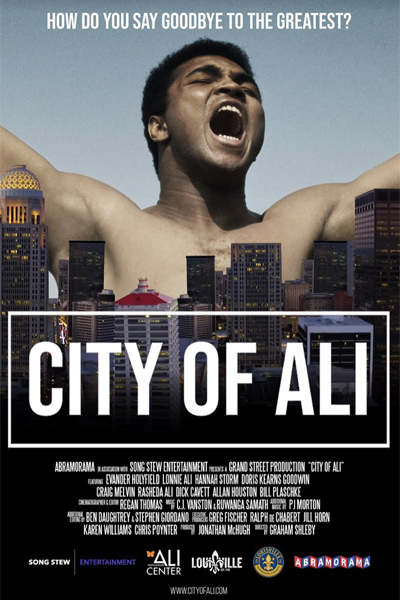 City of Ali is a feature-length documentary that tells the story of how the death of Muhammad Ali brought the people of his Kentucky hometown – and the world – together for one unforgettable week. Ali’s passing on June 3, 2016, came in the context of a bitter U.S. presidential election, a proposed Muslim ban, a series of police shootings of unarmed Black men, and the global emergence of the Black Lives Matter movement.  Yet on the day of Ali’s funeral procession, more than 100,000 people lined the streets of Louisville to celebrate his life and over a billion people worldwide tuned in to Ali’s memorial, held in the packed KFC YUM! Center as stories of the Louisville Lip’s wit, generosity, swagger and commitment to justice were retold by President Bill Clinton, Billy Crystal, Lonnie Ali, and many others.

City of Ali explores Ali’s lifelong relationship with his hometown through candid interviews with friends and relatives whose history with The Champ dates back to his childhood at 3302 Grand Avenue. We get behind-the-scenes accounts of this unprecedented celebration of one man’s life from those who planned the events. We also hear thoughtful reflections from visitors such as NBC’s Craig Melvin, TV legend Dick Cavett, historian Doris Kearns Goodwin, 4-time Heavyweight Champion Evander Holyfield, ESPN’s Hannah Storm and many others who gathered in Louisville to answer the question, “How do you say good-bye to The Greatest?”