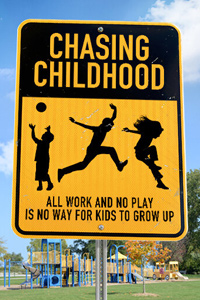 Support the IFS by screening titles straight from independent distributors who routinely provide us with interesting movies. By clicking "watch now" below you'll be able to watch a theatrical release and the distributor will then split the proceeds 50/50 with the IFS, which in turn helps buy us time while we wait for the green light to return to Muenzinger Auditorium.
In today's highly charged world of structure, stranger danger, and helicopter parenting, free play in childhood has disappeared, giving way to unprecedented anxiety and depression. This phenomenon impacts kids from a range of socioeconomic backgrounds. Children's lives are consumed with wall-to-wall activities and constant monitoring-the overprotected, over-directed, over-pressured childhood is the new normal. This film takes us to schools in affluent Wilton, CT; working class Patchogue, NY; and metropolitan Manhattan. Throughout these different stories, a central question emerges: How can we eschew harmful parenting strategies and empower our kids to become their most fully realized, authentic selves? The film offers possible solutions as journalist Lenore Skenazy, evolutionary psychologist Peter Gray, former dean of freshmen at Stanford University Julie Lythcott-Haims, and leaders of the "free play" movement fight to restore a less curated childhood.