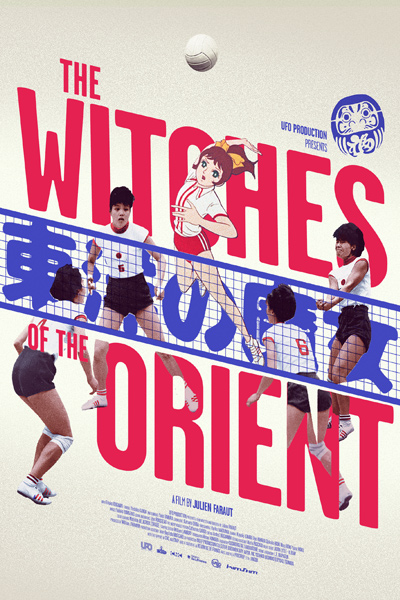 How did a group of humble factory workers become a phenomenal sports success story and the pride of an entire nation? Julian Faraut's (John McEnroe: In The Realm of Perfection) ferociously innovative and visually stunning The Witches of the Orient tells the tale of the Japanese women's volleyball team's thrilling rise, unbelievable 258 games winning streak, and eventual Olympic gold at the 1964 Tokyo Olympics.

United by their jobs in a textile factory, the Japanese women's volleyball team chased absolute perfection under the guidance of their grueling coach Hirofumi Daimatsu. Known as "the Demon,” his intense, endless practice sessions, shaped the team into a powerful force striking fear in the hearts of their competitors and earning them the racist and dismissive moniker "oriental witches.”

Faraut's sparkling documentary uses fantastic manga and anime sequences, such as Attack no 1 (1968), with archival footage of blood-curdling matches, extreme training sessions (driven by rhythmic editing and great music from French musician K-Raw) with testimony from the now-octogenarian teammates. The result charts the Witches' meteoric rise and overwhelmingly vital spirit.

The 'Witches' success is infectious and offers a hopeful prelude to the 2021 Tokyo Olympic Games.