IFS fans, we salute you! 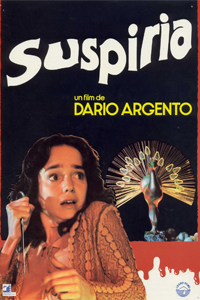 Here is what Walter Chaw of Film Freak Central says:

At their best, Dario Argento's films are lurid splashes of Hitchcockian reinvention that bristle with audacity and a pornographer's sensibility. Known as "The Italian Hitchcock," Argento, as I've said before, is more accurately "The Italian DePalma," in that Argento's imitating reads as homage. When he finds the perfect source material to serve as foundation for his redux perversions (Psycho, Vertigo, The Birds, and Rebecca for Suspiria), the end result can be as original as it is discomfiting.

Young Susy Banyon (Jessica Harper), doe-eyed and lovely (and resembling Brooke Adams circa Days of Heaven to a shocking degree), arrives late one blustery night at her new German dance academy, only to be denied entrance. While Susy yells into an intercom, a girl trails half-heard invectives upon exiting the building and disappearing into the Stygian night. When the same girl and her roommate turn up mutilated the next morning, Susy finds herself embroiled in the mystery of their deaths and the dark secret squatting at the centre of her new school.

Suspiria is an amazing film, easily Argento's masterwork and among the best horror films ever made. His main character mostly passive, Argento depends upon the archetypal power of borrowed images (and his ability to riff on those images) to move the film with its own animal logic; once the term "archetype" is dropped, it goes without saying that Suspiria is the stuff of fairy tale and myth (particularly in Suspiria's case, that of "Amor & Psyche"). Going a little deeper than the magnificent gore effects (and the surplus of them) and the expert establishment of tension and peril, the success of Suspiria reaches all the way into collective night and the fear of meaninglessness in the midst of an ephemeral illusion of order.

The first of a projected trilogy (Inferno is the second film, while the third has never been made), Suspiria breathes like a thing possessed: unsettling, deeply disturbing, and artistically and intellectually satisfying. It is a landmark entertainment, and the high water mark for a director who, for an incandescent period of time, sought to elevate the splatter/slasher film into the auspices of high art.