An open letter to fans of the IFS, from Pablo Kjolseth 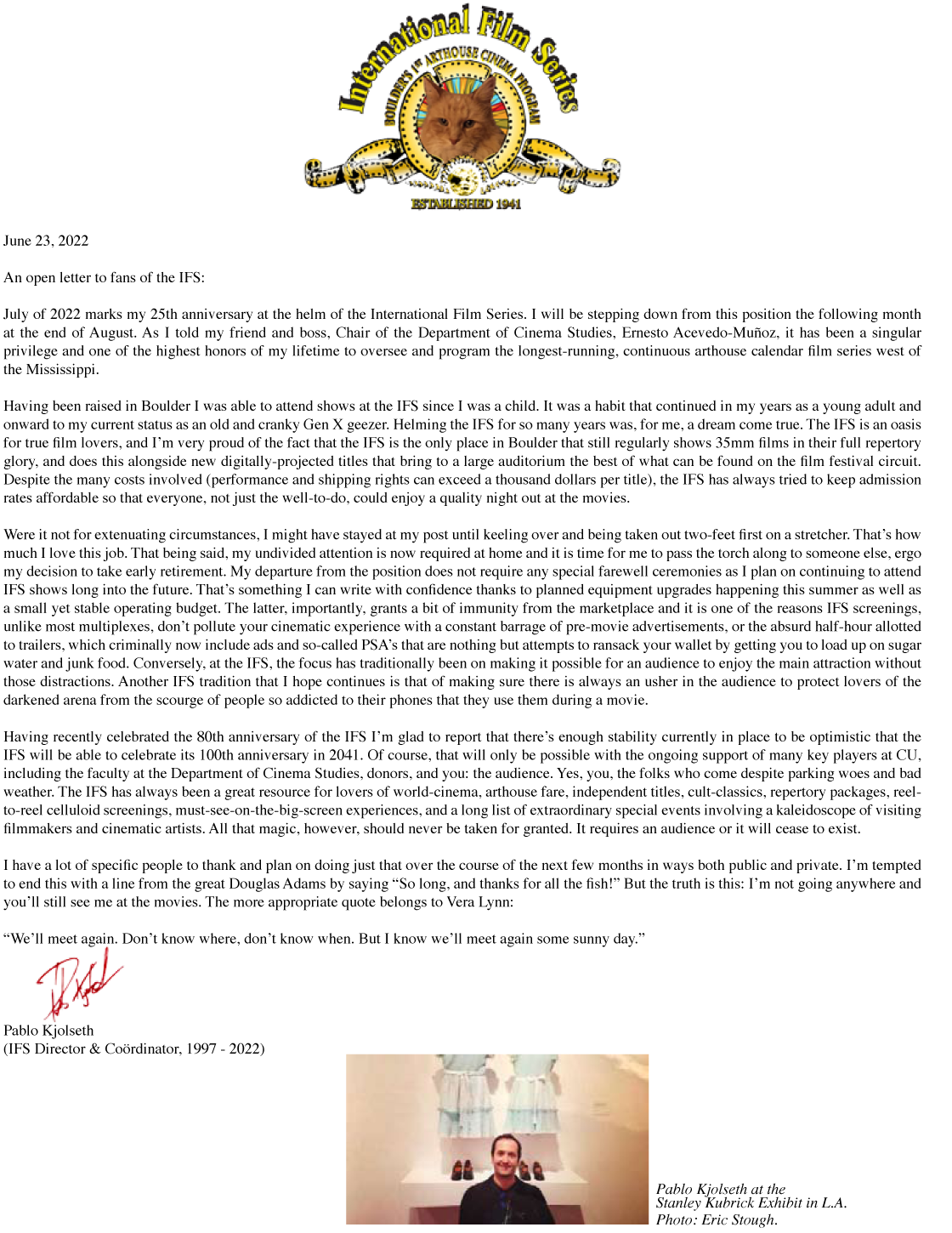 The International Film Series is run by a small but dedicated staff of movie lovers. Look for us at any show and let us know how we're doing.

Jason Phelps, Operations Coordinator & Media Relations Jason started working with IFS and the Cinema Studies department as a student back in 2012. Moving his way up from a cashier and archivist, his role here has grown tremendously. At the International Film Series, he functions under two branches - hence the dual title. As Operations Coordinator, Jason is responsible for employee hiring, training, and scheduling, as well as print trafficking, accounts payable, box office reporting, customer relations, projector maintenance & upkeep, tech support, and some minor programming (particularly with those underground Hit List titles, as well as some assistance with Tournées Festivals). The Media Relations side of his job focuses on trailer branding and editing, digital media management, preshow content production, PSA production, social media, podcast production for “Cox & Kjolseth” (alongside others TBA), some graphic design, marquee creation, DCP transcoding, minor website updates, and digital marketing. There’s also always the added stuff that randomly comes up here and there. Alongside this Jason does similar work for the Cinema Studies department, but all that is for another time...

John Adams, Graphic Design & Layout John Adams does the layout and graphic design for the IFS schedule and print ads. He's a Boulder area painter, digital graphic artist and cartoonist. He submitted the first comic book and video to be seen as part of a Master’s Thesis to the Fine Arts Department (MFA 1974). His hobby is memorizing poetry and he can recite, among other works, Howl. To see what he is up to now, go to originalpureart.com.

Martin Mapes, Webmaster A software engineer and former film critic, Marty keeps all the various versions of our web site up and running, along with our iOS app, daily reminders, weekly updates, custom schedules, and automatic tweets, to name a few.

Ana Mathews, Projectionist/Cashier Ana Mathews is a graduate student focusing on film archiving and preservation. She works as a projectionist between reading, painting, and getting distracted by horror movies and ‘90s sitcoms.

Kendra Nelson, Manager Kendra Nelson is a Cinema Production major who is overstaying her welcome as a 5th year. She enjoys movies, films, and the moving image. In her free time, she is often found crocheting, rollerskating, and staring directly into the sun. She will accept hot and spicy cheez-its as a bribe.

Robert Coller, Cashier is a senior cinema studies major, religious studies minor, and is on track to graduate with a BFA in 2023. In his free time, he enjoys watching movies, reading books, and impersonating as Chris Evans at various small-time film festivals in order to get free food.