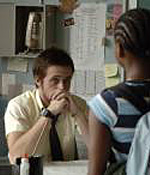 If there was ever any doubt, with "Half Nelson," Ryan Gosling establishes himself as a major talent and one of the finest young actors around. Fortunately, freshman feature director Ryan Fleck and screenwriter Anna Boden have given him a juicy role as a well-intentioned teacher in a black neighborhood whose own life is spinning out of control. A quality indie film in terms of subject matter and execution, the picture should find a receptive audience in specialty venues and later on cable outlets.

An expanded version of Fleck's award-winning Sundance short, "Gowanus, Brooklyn," "Half Nelson" knows the territory and avoids the crusading teacher cliches of lesser films. Besides, Dan Dunne (Gosling) is too screwed up to be a white knight, and in the world he inhabits nothing is black and white.

Dunne is one of those charismatic teachers who has a great rapport and street cred with his students, one in particular, 12-year-old Drey (Shareeka Epps). Drey's life-defining experience to date has been the imprisonment of her brother for dealing. Newcomer Epps keeps pace with Gosling and communicates a soulfulness and wisdom well beyond her years. Dunne, who teaches history with a Marxist slate and coaches the girls' basketball team, tries to keep Drey out of trouble, but he's hardly one to be giving advice. After a game one night, Drey discovers Dunne stooped over in a bathroom stall with a crack pipe in his hand. Dunne has a major drug problem and is struggling just to stay afloat.

For the most part the story is riveting, largely because of Gosling and Epps' work and chemistry together. Nice score, sometimes nothing more than a plaintive guitar, by Canadian band Broken Social Scene is a big plus in setting the tone and keeping the story moving. But at the end of the day, it's Gosling's performance that elevates the material and makes it memorable. (J. Greenberg, Hollywood Reporter)