The Way I Spent the End of the World 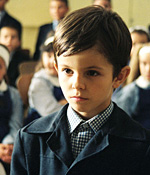 In his feature film debut, Romanian director Catalin Mitulescu creates a provocative, sensual and bittersweet look at the complicated tensions between rebellion and loyalty. The Way I Spent the End of the World chronicles the last few months of Ceausescu’s dictatorship in 1989 as seen through the lives of one family and their neighbors in a poor neighborhood on the rural edges of Bucharest. Eva (Dorotheea Petre), a fiercely independent teenage girl of 17, lives with her parents and her seven-year-old brother Lalalilu (Timotei Duma). One day at school, Eva and her boyfriend Alex accidentally break a bust of Ceausescu and they are forced to confess their crime before a disciplinary committee. Alex’s father, a Party officer, protects him, but Eva is expelled from school and transferred to a reformatory. There, she meets Andrei, a boy from a family of dissidents, and decides to escape Romania with him by swimming the Danube in home-made lifejackets. Lalalilu is more and more convinced that Ceausescu is the main reason for Eva’s decision to leave. So, with his friends from school, he devises a plan to kill the dictator during a national celebration where they will be singing in a children’s choir. This gorgeously shot family drama frames the parallel coming-of-age tales of the tautly sexy Eva and her younger brother Lalalilu within the last days of the Communist stranglehold on the Eastern Block nation. With its combination of wry satire and deadly hardship, viewers will find The Way I Spent the End of the World reminiscent of the groundbreaking Czech comedies of the 1960s from directors like Jiri Menzel, but with an added dimension of political urgency which is all too relevant today.

The Way I Spent the End of the World