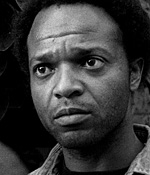 The man gazes across the room with sad eyes deadened by his daily toil in a slaughterhouse. His wife wonders what's wrong. But the pain cannot be verbalized. It can only be captured by the camera in stark, black-and-white imagery.

The scene comes from the drama Killer of Sheep, long considered a sort of cinephile's Holy Grail, widely coveted but hard to find. Shot 30 years ago on a shoestring budget by a UCLA film student named Charles Burnett, the nonlinear portrait of a working-class black family struggling to get by in the Watts section of Los Angeles has accumulated a number of honors over the years. The Library of Congress enshrined it in the National Film Registry. The National Society of Film Critics counted Sheep as one of the 100 essential films of all time.

Killer of Sheep was Mr. Burnett's thesis film at UCLA film school, which he attended after studying electronics at Los Angeles City College. The film wasn't designed to recall the lightning-in-a-bottle magic of the Italian neorealists. But it does. Watts is Mr. Burnett's Rome, an urban environment that becomes as much a character as any of the people in the film. (C. Vognar, Dallas Morning News)