An evening with Eric Stough 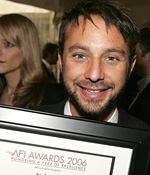 As part of Film Studies’ ongoing Alumnight series, we are pleased to present Film Studies graduate Eric Stough (BFA, 1995). Eric won an Emmy for his work on South Park, was an actor in Orgazmo (1997), and won awards for his short film Revenge of the Roadkill Rabbit at the 2000 Athens Film Fest.

Eric Stough attended the University of Colorado with South Park co-creators Trey Parker and Matt Stone, eventually directing such classic episodes as "Scott Tenorman Must Die" and "Butters' Very Own Episode" (The character of Leopold "Butters" Stotch on South Park is in fact a lampoon of him.)

An evening with Eric Stough