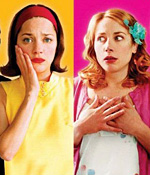 The romantic contretemps of a lovelorn woman (who writes the thought-balloons for photo-novellas) and her shy musician sister are explored with a light touch and bittersweet undercurrent in "You and Me." Sophomore pic from 2002 Camera d'Or-winner Julie Lopes Curval ("Seaside") uses the retro tableaux of illustrated romance mags to echo and embellish her characters' feelings and aspirations, to sharp comic effect. Helmer has found a way to examine the doubts of thirtysomething professionals that feels fresh, while questioning the vestiges of the "some day my prince will come" mindset.

While the picture is relatively breezy, the photo-novella gimmick exposes the pitfalls of fairytale romantic notions and wishful thinking when they take the place of concrete actions. Narrative is also a pretty astute examination of how the same situation can look radically different from a male or female point-of-view. Thesps is well cast, with Cotillard's lovely and gifted but painfully ambivalent cellist particularly touching. (L. Nesselson, Variety)