A meditation on industrial impact 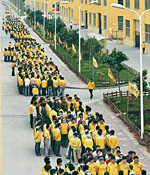 Nothing illustrates the monstrosity of globalized commerce more vividly than the lateral tracking shot that opens Jennifer Baichwal's mesmerizing documentary "Manufactured Landscapes." Maintaining a glacial, Kubrick-like creep for eight minutes of screen time, the camera glides almost a third of a mile through the bubble world of one titanic Chinese factory.

Afterward, massed on the street outside in color- coordinated formation as far as the eye can see, the many thousands of employees are robbed of all individuality. Pictorially, though, the image is breathtaking, even playful— Metropolis as designed by Busby Berkeley.

The sight should scare the hell out of environmentalists as well as economic protectionists. But Baichwal's meditative, mood-altering film—strongly recommended to fans of Koyaanisqatsi and An Inconvenient Truth, and no less important than either—is more suggestive and unnerving than a mere jeremiad. Its focus is photographer Edward Burtynsky, who specializes in macroscopic panoramas that show how industry has smashed, scarred, and altered the environment. With cinematographer Peter Mettler working to approximate Burtynsky's eye-in-the-sky perspectives, Baichwal follows the artist's travels through China, where he leaves government officials puzzled over why he'd rather photograph, say, the Martian desolation of Shanghai's endless Bao Steel yards than pandas and temples.

But the yards are temples—Ozymandian monuments to man imposing the will of commerce on entropic disorder. Strip-miners, outsourcers, and earth movers do Burtynsky's processing for him, raking the wilderness into strikingly patterned Japanese gardens of ruin. It's the terrifying vastness of his subjects—a mountainous computer graveyard, the mammoth Yangtze River Three Gorges Dam project shown in Jia Zhangke's Still Life—that gives both his photographs and Baichwal's film the hypnotic otherworldliness of science fiction. Yet the scale and symmetry of Burtynsky's work tends to eclipse outrage with awe, which adds to its snake-charming potency.

By finding beauty in appalling heaps of corporate waste and industrial devastation, is Burtynsky aestheticizing the plunder of the planet, and are we lulled into cowed complacency by his Olympian vantages? As in her excellent Shelby Lee Adams doc The True Meaning of Pictures—which refuses to resolve the tension between genuine concern and freak-show gawking in Adams's Appalachian photographs—Baichwal undercuts easy answers. Her subject is the discrepancy between how an artist sees the world and how the world sees the art. Where Burtynsky sees the coppery glow of a river of toxic waste, we're inclined to see unnatural disaster—until we stand rapt before his elegiac photograph.

"Manufactured Landscapes" challenges us flyspecks to relocate our compass, if we can, within the cosmic enormity of Burtynsky's pitiless vision. (J. Ridley, Village Voice)