An intimate and exuberant subculture 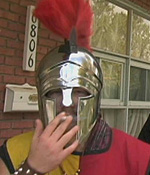 Well, what if you combined those two groups? You'd have Darkon, a role-playing fantasy game in which the participants actually dress up as wizards and warriors and engage in mock battles with homemade medieval weaponry.

These guys (and, yes, a few girls) are the subject of "Darkon," a documentary that peers casually into the inner workings of the game and lets us laugh at -- er, with? -- the participants. Directors Andrew Neel and Luke Meyer spent several months with the players in the Baltimore area, and while the resulting footage is highly entertaining, I can't shake the feeling that Neel and Meyer are staging a freak show. But the subjects seem happy with the film -- one of them was lumbering around the South by Southwest Film Festival in his body armor to promote it -- so what do I care?

We open with some hilariously cheesy fantasy mumbo-jumbo ("It was a time of unrest in the realm of Darkon," and so forth) and soon meet the major players. Skip Lipman, a friendly bear of a man, leads the nation of Laconia under the name Bannor. Laconia is a small, peaceful land that has grown frustrated with the imperialistic superpower called Mordom, led by Keldar (whose real name is Kenyon Wells), and Keldar and Bannor frequently engage in heated discussions over the future of their countries.

Everyone has a great time in Darkon, and as the film shows them off the playing field ("out of character," as they put it), we see that they participate in Darkon for the reasons you'd expect. Real life offers very few chances to be a hero; some of the guys aren't successful socially or professionally; Darkon is a chance to explore sides of yourself that otherwise would go untapped; etc.

The best documentaries of this genre (i.e., Unusual People Who Do Unusual Things) humanize their subjects so well that we come to identify with them and realize how much we have in common. "Darkon" doesn't do that. It has a lot of good-natured fun with the players, but it keeps everything on a fairly superficial level. Someone who thinks a Darkon participant would have to be a hopeless loser isn't liable to think any differently after watching the film. On the other hand, someone who's into this sort of thing is bound to think: Awesome! Now there's a league I can join! (E. Snider, EricDSnider.com)