The Profound Desire of the Gods 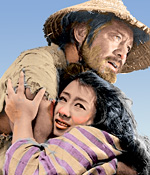 The robust good looks of Shohei Imamura's 1968 Cinemascope epic ''The Profound Desire of the Gods'' only heighten the perverse quality of the action, and Mr. Imamura's ribald, casually comic direction has much the same effect. This three-hour film makes an ideal introduction to the maverick qualities of this film maker's idiosyncratic style.

At some moments sounding a note of bizarre domestic comedy, and at other times attempting tragedy of mythic proportions, ''The Profound Desire of the Gods'' is nothing if not far-reaching. It unfolds on the tiny, remote island paradise of Kuragejima, in the Ryukyu Islands, and it concerns the Futori family, who are widely regarded as beasts by their neighbors. As the film demonstrates, there is a certain amount of justification for this. The Futori family history is rich with incestuous unions, forbidden practices and punishments from both fellow islanders and the gods.

So one of the family members, a man named Nekichi (Rentaro Mikuni), has been chained in a pit for his crimes; his sister and onetime lover, Uma (Yasuko Matsui), has become the much-abused mistress of the manager (Yoshi Kato) of a local mill. Another Futori is the wanton, feebleminded Toriko (Hideko Okiyama), who scampers about happily in a burlap sack and is much too popular with the local men. There are also a venerable, mischievous grandfather and a grandson named Kametaro (Choichiro Kawarazaki), who remains understandably confused about his lineage. And there is a certain majesty to all this squalor, for the gods who founded Kuragejima are said to have been as incestuous as the Futoris themselves.

The early parts of the film unfold in a sunny, unhurried, halfway humorous style, as Mr. Imamura documents the peculiarities of the Futori household. And there are frequent shots of the exotic sea and land creatures that live side by side with the islanders, suggestive of another dimension. Indeed, these glimpses of nature are specifically equated with divinity, and the film creates a strong sense of all-knowing, ever-present unseen powers. In one scene, the village storyteller sings of Kuragejima's gods and goddesses to a group of children, while a snake slithers placidly in the foreground.

A subplot introduces a bespectabled engineer (Kazuo Kitamura) who has come from Tokyo to help modernize Kuragejima. Having no understanding of the local people's deep superstitious and religious convictions, this engineer is a ready source of low-keyed comedy as he tries to adapt his plans to the local customs. (J. Maslin, New York Times)

The Profound Desire of the Gods