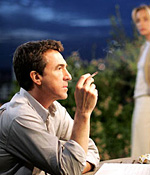 A man becomes a suspect in his wife's brutal murder; eight years later, the killing of two women in the same location reopens old wounds -- and the case against the husband. The plot thickens when he receives a mysterious message with information about his wife suggesting she may still be alive. Stars Francois Cluzet, Kristin Scott-Thomas; adapted for the screen and directed by Guillaume Canet.

The award-winning French thriller “Tell No One” is based on an American mystery novel, by Harlan Coben, that has been transposed to a French setting, and, halfway through the movie, I realized I was very happy that everyone was speaking French. The reason is simple: an American version of this material would have had too many explosions and far too much violence in general, and it would have been similar to thirty other thrillers made here during the past ten years. But the young director, Guillaume Canet, working with the screenwriter Philippe Lefebvre, has set Coben’s material in a realistic social and working world where good-looking, intelligent, and articulate people find one another interesting. La belle France! This emphasis on sociability is not unusual in French commercial filmmaking, but it’s virtually unknown in genre movies made here these days. There is violence—some of it startling, all of it significant—but that’s not what the movie is about.

“Tell No One” is devoted to the explication of a single, devastating event, which we see at the beginning. At a lake deep in the Rambouillet Forest, near Paris, a happily married couple, Dr. Alex Beck (François Cluzet) and his social-worker wife, Margot (Marie-Josée Croze), celebrate their anniversary by going for a naked swim in the moonlight. After resting on a raft, they have a tiny quarrel, and Margot swims ashore. Still lying on the raft, Alex hears a muffled cry from the woods; he swims frantically, but when he climbs out of the water someone clobbers him, and he falls back into the lake. The movie then leaps ahead eight years: Margot was killed that night; Alex, a pediatrician, works in a clinic outside Paris. He’s still in mourning, still eaten up by what happened—by what he didn’t see, by what he doesn’t know. He can never return to his private Eden, the erotic harmony of the forest and the lake, but he longs for it nonetheless.

Animated and charming with children and their parents, Alex, in the rest of his life, has become a stubborn, bitterly reserved man, opening up only to his sister’s girlfriend, played by the English actress Kristin Scott-Thomas (whose French is good). Cluzet, a mainstay of French cinema for more than twenty years, has thick dark hair and a fleeting physical and spiritual resemblance to Dustin Hoffman. Like Hoffman, he’s a preternaturally attentive actor who seems to see more than other people do. The dramatic life of “Tell No One” is centered in Cluzet’s eyes. When messages show up on Alex’s computer suggesting that Margot may still be alive, he’s amazed and, in a state of bafflement, tries to reach her, only to run into the police and half the criminal underworld of Paris. “Tell No One” jumps all over the place but invariably returns to Alex’s need for his wife, who, it turns out, was involved in relationships years ago that he didn’t understand. Past events, like restless ghouls, keep barging into the present, and the many mysteries have to be explained in a long confession at the end. We know the material is artificially—even deviously—constructed, and we enjoy being manipulated by people who know what they’re doing. But it’s Cluzet’s intense performance that makes this genre piece a heart-wrenching experience.

Canet commits one major error: the little clearing in the forest that Alex and Margot have been visiting since they were children can be entered only between parallel columns of gorgeous pink-orange rhododendron bushes, a Disney touch that we see twice and that converts sentiment into a mawkish sanctification of eternal love. Otherwise, he moves a talented cast skillfully through a large and varied world. It’s a remarkably well-populated movie—fleshed out not just with Alex’s family and friends but with a relentless group of high-tech thugs, including a female sadist with a long neck and powerful hands, which she uses to squeeze her victims in tender places (not the obvious ones). And there is the volatile criminal Bruno (Gilles Lellouche), a lowlife so indebted to Alex for his treatment of Bruno’s little boy that he becomes a loyal friend and protector—an armed guardian angel. Bounced back and forth between these killers, Alex has some unsettling adventures and, in small increments, learns about the past. We’re meant to be a little lost, too—tantalized by hints and partial appearances and echoes. Underneath all the mysteries, however, some powerful forces are at work—the corrupting effects of a great fortune, and the love of fathers for children, which causes two old men (Jean Rochefort and André Dussollier) to do vile things. This is a thriller that’s more about discovery than about action. Alex’s search for Margot becomes a search for truth. He can’t tell the two quests apart, and, while watching “Tell No One,” neither can we.