Basks the viewer in beaming ideas 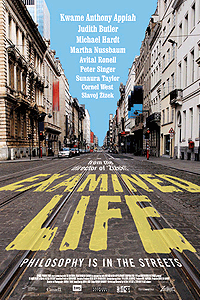 "Things," as Dwight D. Eisenhower once observed, "are more like they are now than they have ever been before." But why? Is something better possible? Could there be another way of looking at life--or movies? Ideas beam out from Astra Taylor's engaging new philoso-doc Examined Life; the viewer basks in the intelligence on-screen and, occasionally, soaks up the rays.

A purveyor of intellectual vaudeville, the thirty-ish Taylor has mobilized a group of professional philosophers. Coaxed from their classrooms to hold forth in the midst of life are Cornel West, Avital Ronell, Peter Singer, Kwame Anthony Appiah, Martha Nussbaum, Michael Hardt, Judith Butler, and the voluble subject of Taylor's previous doc, Slavoj Žižek, who typically steals the show by staging his rant--a critique of "ecology"--in a garbage dump.

Something new under the sun? Very smart people explain how to live without religion even as they self-consciously attempt to be in the moment. Taylor's emphasis is on moral philosophy and, although her film's structure is not exactly dialectical, it's been assembled so that, without ever meeting face-to-face, the philosophers appear to critique each other's ideas. Thus, after West convenes the symposium by invoking Socrates' defense of self-reflection ("The unexamined life is not worth living"), Ronell pops up to interrogate the nature of self-reflection, questioning the filmmaker as to the nature of her project and slyly invoking Heidegger's "path to nowhere" as she strides purposefully through a Manhattan park as filled with layabouts as any Greek agora.

The most stylish of the assembled philosophers, Ronell professes a suspicion of meaning and speaks in praise of moral anxiety: "If you have a good conscience, then you're worthless." Taylor retreats from the void, however, by moving the discussion to safer territory. Animal liberationist Singer takes a midtown shpatzier along Fifth Avenue, smugly observing conspicuous consumption while explaining that ethics are a matter of basic choices. Standing in Times Square, Singer declares the meaning of life to be commitment to the common good. This neo-Kantian platitude effectively stops the conversation, although not the discourse. (At the very least, it illustrates the distinction that Ronell made, following Heidegger, between philosophy and thinking.)

Appiah uses an empty airport as a backdrop to parse the difference--highly relevant to our last presidential election--between an open-minded cosmopolitan and a parochial universalist. Strolling around Lake Michigan, Nussbaum introduces the social contract and (cosmopolitan?) notion of justice for the disabled--while the filmmaker unaccountably underscores the philosopher's presentation with obtrusively jaunty cocktail music. That Nussbaum lacks the gift of gab is accentuated by Cornel's return--driven by Taylor around Manhattan as he opines on the courage to think, with a torrent of name-dropping that climaxes in his delighted self-characterization as "a jazz man in the life of the mind."

The beat goes on as political philosopher Hardt, co-author of Empire, rows the filmmaker around Central Park lake. Faint strains of salsa can be heard as Hardt explains how, 25 years before, he'd gone to Nicaragua to learn how to make a revolution. In the movie's best bit of improvisation, the professor gets so caught up in his ideas that he runs the boat aground. Having failed to notice that he's not navigating a gated park, Hardt draws attention to the lake as "not a bourgeois, but an aristocratic location"--an inadvertent punch line that pretty much sets up for Zizek's expulsive performance beside a colossal trash heap: "This is where we should start feeling at home." The subject of his rant is ecology--which he describes as an ideology, in the Marxist sense of a comforting falsehood. "We need more alienation from nature," this most provocative (and creature-like) of the thinkers declares. "We should become more artificial."

The most action-oriented member of Taylor's cast, Butler takes a walk through a San Francisco neighborhood in the company of a disabled friend, artist Sunaura Taylor. Engaging in dialogue and picking up the thread of Nussbaum's argument in the light of Zizek's unsentimental humanism, Butler uses the excursion as a teachable moment on the politics of disability. West, however, gets the last word: He assimilates Zizek's attack on nature by suggesting wisdom begins with catastrophe and arguing against grandiose romantic projects: "Why think you should have the whole thing?" Why, indeed?

Life puts an exclamation point at the end of Taylor's variety show. As West jumps out of the filmmaker's car at the north end of Union Square and makes for the subway, two girls rush out of the crowd to shake his hand. It's The Matrix reloaded!