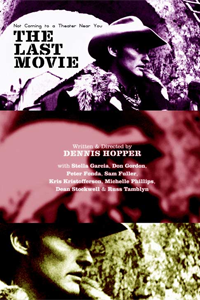 The Last Movie, the exhilarating cinematic outrage that incinerated Dennis Hopper's career in 1971, might also be known as The Lost Masterpiece—the 35mm print showing for a week at Anthology Film Archives could be the only complete version in existence. Would that it were part of Anthology's permanent collection.

Most simply put, The Last Movie concerns the ill-fated production of an American western in Peru—which is to say itself. Most simply explained, the movie allegorizes the implosion of '60s hopes. One of the craziest (and druggiest) movies ever made, it's also blatantly self-deconstructing and meta to the max, albeit produced years before those terms became commonplace. The closest enterprise to Hopper's is William Greaves's roughly contemporaneous (and long withheld) hall-of-mirrors acting exercise, Symbiopsychotaxiplasm. But that was an indie. Hopper's megalomaniacal follow-up to the mega-success of Easy Rider is the single most radical instance of old "new Hollywood" filmmaking in part because he pushes the notion of "uncommercial" to the far side of the moon.

The Last Movie was actually to be Hopper's first. Inspiration hit him in Durango, Mexico, during the making of the John Wayne western The Sons of Katie Elder—"I thought, my God, what's going to happen when the movie leaves and the natives are left living in these Western sets?" Hopper hoped to make The Last Movie in 1966 but the project fell through when music producer Phil Spector withdrew financial support; his opportunity came in the wake of Easy Rider. Universal gave Hopper $850,000 and total autonomy (including final cut), so long as he stayed within budget.

Hopper planned to shoot The Last Movie in Mexico but feared government censorship—thus the project was mainly shot in the remote mountain village of Chincheros, Peru. Despite difficulties that included the impossibility of viewing his dailies, Hopper finished on schedule— taking 40-some hours of rushes with him to Taos and driving Universal nuts by mulling over his footage for 16 months.

Given Easy Rider's epochal success, The Last Movie was the most eagerly awaited picture of 1971. After winning an award at the Venice Film Festival, Hopper's opus opened in New York and broke the single-day box office record at the RKO 59th Street theater, site of Easy Rider's triumphant engagement. But unlike Hopper's first film, The Last Movie was attacked and ridiculed by virtually every reviewer in America and was withdrawn by its distributor within two weeks. Although it achieved a negative notoriety unsurpassed until Heaven's Gate, The Last Moviewas not a financial boondoggle. Hopper's sin wasn't wasting money—it was something far worse. The Last Movie is an act of visionary aggression that desecrates Hollywood's universal church.

On first viewing, The Last Movie may appear to be a nonlinear, nonsensical string of non sequiturs—many of them an affront to conventional taste. But far from chaotic, The Last Movie involves three interlocking films. The first is a Hollywood western about Billy the Kid directed by Sam Fuller on location in Chincheros. During the course of a particularly violent shoot-'em-up, the actor playing Billy is accidentally killed. Shaken, the stunt man Kansas (Hopper) remains behind, taking up with an ex-whore named Maria and building himself a Malibu-type home on a mountaintop.

Like The Wild Bunch, to which Hopper alludes, The Last Movie is an apocalyptic western set south of the border. But where The Wild Bunch tends to treat whoring around as boyish fun, The Last Movie dwells unpleasantly on the relation between sex, power, voyeurism, and money in a foreign land—it's a critique of American imperialism, cultural and otherwise. Fuller's movie within the movie is a model for a heedless invasion that casually exploits or even destroys the indigenous culture.

Although, ironically, there seem to be no Indians in the Fuller production, they are everywhere around Chincheros— eager to be westernized. Maria feels she must have beauty treatments, demanding a swimming pool, a refrigerator, and a fur coat. For his part, Kansas lives in his own hippie illusion, wandering in and out of the Easy Rider–style lyrical interludes hilariously punctuated with close-ups of flowers and scored to insipid folk rock. It is his further fantasy to develop Chincheros as a production site. The only subsequent movie, however, is conceived by the local Indians.

Having watched the shooting of Fuller's western, they restage it as ritual on the abandoned set. Reversing the original procedure, the Indians use make-believe equipment—woven mainly from wicker—but "document" actual violence. Kansas, who vainly attempts to disrupt this ritual, is designated "el muerte" and chosen to die at the climax of this second movie—thus triggering the third. Narrative evaporates with Kansas's death and The Last Movie turns into a comic documentary of Hopper and his crew. The death scene is played over and over, actors go out of character, the on-set photographer wanders on camera.

This collapse of the fictional story line is superseded by the disintegration of cinematic representation. The movie loses sync, the sound of the camera intrudes, the editing dissolves into black leader, the emulsion is scratched. The shadows refuse to be anything more than shadows, leaving the bemused audience to its own devices. Kansas dies for America's sins but when The Last Movie destroys itself it is to liberate us all—or at least, make Hopper's point that, so far as the movies go, everyone is an Indian.

The Last Movie made the name "Dennis Hopper" marquee death. Finished in late 1971, Kid Blue—an amiable comic western with Hopper as an aging outlaw attempting to go straight—was shelved for over a year. After a New York opening was canceled, the movie was included in the New York Film Festival. This honor proved the kiss of death. Kid Blue's ensuing commercial run lasted four days