Nostalgia for the Light 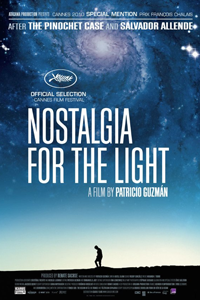 Patricio Guzman's visually elegant, deeply felt documentary already has a lock on any competition for the year's best title. "Nostalgia for the Light" is even better in Spanish, "Nostalgia de la luz."

The light in question is threefold: the celestial light that reaches telescopes in Chile's Atacama Desert; the rapturously clear light and air that make the desert so hospitable to both telescopes and Guzman's camera; and the light of historical truth.

Guzman's most famous work is an epic three-part documentary on the Chilean military's 1973 overthrow of the democratically elected government of Salvador Allende, "The Battle of Chile" (1977, '78, '80). Just as telescopes looking at the cosmos are looking at the universe's past -- with amused admiration, one of Guzman's interview subjects calls astronomers "archeologists of space" -- so is daily life in Chile inevitably a constant study of the country's past four decades.

The Atacama had a double role to play during the dictatorship of Augusto Pinochet. The remoteness that helps make it ideal for observatories made it equally ideal for concentration camps and the disposal of murdered prisoners' bodies.

What starts out as a beautifully depopulated filmic exercise -- it's 14 minutes into the movie before Guzman introduces any people -- becomes toward the end a nearly unbearable examination of good and bad in the human heart. Guzman lets us hear from several women who have been literally sifting through the Atacama for the remains of loved ones. They sit in the desert, like exiled prophets, and speak of their mission. "I wish the telescopes didn't just look into the sky," one of them says, "but could also see through the earth so that we could find them."

There is so much beauty in "Nostalgia for the Light." The starkness of the Atacama makes Death Valley seem almost lush by comparison (that's only a slight exaggeration). Guzman includes amazing celestial sights, too: galaxies, nebulae. Both inside and out, the observatories are splendid structures, like temples, looking perfectly at home in such an Old Testament landscape. Nothing here is as beautiful, perhaps, as certain everyday images Guzman puts on display: the gears working on an old telescope, a tree against the exterior wall of a house in Santiago, many marbles arrayed on a table. They could be planets -- or tiny bombs.

Nostalgia for the Light