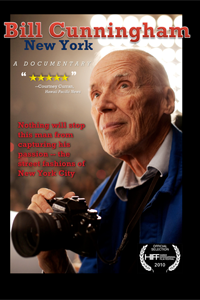 "Bill Cunningham New York" is both a tribute to a somewhat lost artistic past, when artists lived in affordable studios above Carnegie Hall and celebrated daily life with the likes of Editta Sherman, Leonard Bernstein, Marlon Brando and Andy Warhol, and a celebration of the present life of Bill Cunningham, longtime fashion and social-scene photographer for The New York Times, where his "Evening Hours" and "On the Street" columns have captured the lives and styles of New York's finest and most trendsetting for what seems like forever (well, since the '60s).

A young, working-class Catholic child who started a fashion label, served in the army and became a milliner (under the brand William J.) before exclusively turning his hand to his cameras, Cunningham is an irreplaceable institution with such an incredible eye for gauging what's happening and such an encyclopedic knowledge of what's come before that when he eventually stops his bicycling around New York and quits his jaunts to Paris for Fashion Week, the world will have lost insight into one of the world's most glamorous and equally practical and impractical industries.

To say the film, or rather Bill himself, is endearing is to say the famous mime Marcel Marceau was kind of quiet. That this film would be showing the same year as Leon Gast's "Smash His Camera," a documentary about New York paparazzo Ron Galella, who stalked celebrities as pecuniary prey, is to truly exhibit two extreme sides of the coin. Nothing Cunningham does is for the sake of celebrity, and to a sacrificial extent, nothing Cunningham does is ever done for money. Famously, he tore up checks from employers at the original Details magazine and never collected his monies from commercial publishers for fear that it would compromise his ability to do things his way.

While Anna Wintour recalls Cunningham having captured her on film for half a century, stating "We all get dressed for Bill," Cunningham himself offers some courageous insight into the people he admires, those outside the box of sameness: "A lot of people have taste, but they don't have the daring to be creative." Cunningham's world is one of high fashion fueled by cheap coffee and greasy sandwiches, a world where kitchens, bathrooms, appliances and personal privileges are to be sacrificed for space for filing cabinets and hardcover fashion photography monographs.

Cunningham manages to single-handedly pursue both couture and the interpreted street realities of fashion, and yet many people who've worked in and around the photographer for their lifetimes know surprisingly little about his life and habits. And to an extent, he almost seems embarrassed by his self outside of his position behind the lens and fiercely protective of those he captures in it, even calling those who wear black garbage bags against the sideways streaming rain of Manhattan as being enveloped in "a black rose."

Cunningham is the outgoing introvert in a world of extroverted exhibitionism.

Coverage of ordinary people going about their business dressed extraordinarily didn't really start until Cunningham started it when David Montgomery gave him his first camera. From then on, it was Saturdays down in Soho and Sundays in Central Park, denim dresses, shirttails, leggings and legs, and the occasional splat of his bicycle into the back of a taxi cab.

Industry magnates label him "uncompromising," "objective," "egalitarian," "a maverick," while in Richard Press' portrait, Cunningham himself only ever seems to appear to want one title, all day, every day, for life: "fashion photographer." To the exclusion of all other things — yes, all — this is indeed a love story between a man and his profession.

As Cunningham himself states, "He who seeks beauty will find it," the use of the Velvet Underground's "I'll Be Your Mirror" seems a fitting salute:

I find it hard to believe you don't know
The beauty that you are
But if you don't let me be your eyes
A hand in your darkness, so you won't be afraid

'Cause I see you
I'll be your mirror.