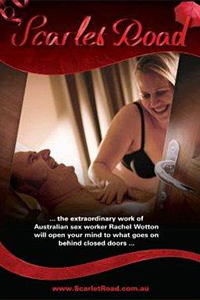 Catherine Scott’s Scarlet Road is the second feature-length doc I’ve seen this festival that showcases differently-abled people. It’s an umbrella term which makes it inadvertently confusing, so to clarify, the subjects of Frog Princes mostly have developmental differences like autism or Down’s Syndrome. There is also a minor subject in this movie with Down’s Syndrome, like the young adult male in England who needs a sex worker so that he can lose his virginity. But males with developmental differences aren’t the only group that fits within the niche of the clients of this movie’s major subject, Sydney-based sex worker Rachel Wotton, who also caters to people with cerebral palsy or MS. She and her clients are perfect fits in many ways but mostly because they’re both discriminated against in Australian society.

As well as being about Rachel’s story and struggle, this movie is a good lesson about different versions – mostly Australia’s – of multiculturalism. For example, while Rachel and the British man look up possible sex workers for him, they find a website that lists anal sex as “Greek sex”, because apparently some societies are perpetually still in high school – he asks what “Egypt sex” is, which he’ll invent one day (the movie has its share people talking graphically about sex, which might make it uncomfortable for some viewers). Another instance has Rachel visiting friends and other sex workers overseas so  she can bring her ethos of tolerance to other countries. Finally, while Rachel is strolling around a European city with a fellow sex worker, Pye, they walk by a Herzegovinian restaurant, which I’ll visit one day.

Anyway, to more serious stuff, it’s also a lesson on policy (I won’t be comparing other countries’ sex laws with Canadian ones) and how she and like minded sex workers deal with it. I haven’t checked on Australian politics but this movie shows that states control sex laws, so her relative freedom to practice her work in New South Wales won’t yet happen in Queensland. Her boyfriend Matt lives in Brisbane, Queensland and they consider moving her to Queensland but she won’t be able to work there. The legalized status of “whores” in NSW make it also possible for her to give workshop classes for other workers of different ages and genders, teaching them how to handle differently-abled clients. Pye also talks about how her home country and base, Sweden, criminalizes both her clients and herself. Unlike the image of sex workers as uneducated victims, Rachel and Pye talk to the camera soberly, becoming the new breed who know what they’re talking about. It’s their proletarian instinct to know how they want their rights to be.

I’m making it seem that Scarlet Road is info-heavy and stuffier than it really is. Yes, Rachel frustratingly says that she just wants ‘to be a whore’ instead of being a speaker for sex worker rights. And there’s also a scene where she’s on the brink of tears. But otherwise the doc’s tone is sunny thanks to Rachel. We see her with her blond hair, walking around with her scarlet umbrella, suggesting the tolerably quirkiness that she,  Pye and other like-minded workers do. Also, unlike the docs I’ve seen during this festival that have violent shifts in tone and POV, this doc is beautifully seamless and almost chapter-less. It corresponds with Rachel’s energy and her open personality, like she’s introducing the audience to her friends who all belong together.

The movie also has two foreplay scenes, which are lit and shot sensually, but when there are close-ups of Rachel we see her smiling instead of giving a forced ‘sex face’, making these encounters less titillating and more sincere. This doc is being shopped for TV distribution and I hope to see it on more screens, large or small, so more people can be aware of her perspective on how sex and tolerance should be.

I suppose it’s reductive to assume that one person, even as nice as Rachel Wotton, is a representative of all sex workers. But Scarlet Road isn’t about the idealization of sex workers and their industry but its humanization. And this documentary is loyal to her world view and struggle, becoming one of the most tonally consistent and great docs I’ve recently seen.